Biden Admin Blocked Weeks Of Independent Press Access To Now-Closing Long Beach Convention Ctr. Migrant Minor Facility And Mayor Garcia's Tweets Helped Legitimize It If LBREPORT.com didn't tell you,
who would?No one in LBREPORT.com's ownership, reporting or editorial decision-making has ties to development interests, advocacy groups or other special interests; or is seeking or receiving benefits of City development-related decisions; or holds a City Hall appointive position; or has contributed sums to political campaigns for Long Beach incumbents or challengers. LBREPORT.com isn't part of an out of town corporate cluster and no one its ownership, editorial or publishing decisionmaking has been part of the governing board of any City government body or other entity on whose policies we report. LBREPORT.com is reader and advertiser supported. Support independent news in LB similar to the way people support NPR and PBS stations. We're not so it's not tax deductible but $49.95 (less than an annual dollar a week) helps keep us online. (July 24, 2021, 9:15 a.m.) -- A delegation from the Los Angeles Dodgers was allowed in.

In partnership with @uclahealth and @HHSGov, Dodger players and broadcasters spent time visiting migrant children in Long Beach yesterday. The players played wiffle ball with the kids, handed out Dodger gear and arrived ready to provide hope and encouragement. pic.twitter.com/pmVAppS8qE

So were Long Beach City Councilmembers. So were Mayor supportive elected officials. But access to the Temporary Federal Migrant Detention Facility at the Long Beach Convention Center was thwarted from outset to end by the Biden administration's Dept. of Health and Human Services with Mayor Garcia serving as its de facto media mouthpiece.

1538 migrant kids are now unified with family or sponsors from our Long Beach shelter. No children remain in the convention center and we are so thankful for this incredible effort and the support. pic.twitter.com/nnyc5y9fRP

The stonewall began on April 22, the first day Mayor Garcia, Congressman Alan Lowenthal (D, Long Beach-west OC), Long Beach Councilmembers and allied groups were given a "tour" of the facility (accompanied by an official minder) while Long Beach and Los Angeles media outlets, including LBREPORT.com, were kept out. We and others were left standing outside a controlled press event and offered only "pooled" photos and text from one officially allowed LB outlet and video from an LA TV outlet.

To be clear; there was absolutely no physical reason to "pool" access at that day's event. The real reason we believe was to control independent media access and oversight and legitimize the practice elsewhere.

Sure enough, varieties of the restrictions were replicated elsewhere. When officials staged a migrant minor event at L.A. County's Pomona fairgrounds and again restricted independent press access -- and a County media advisory demanded questions in advance -- we asked L.A. County Supervisor Hilda Solis' deputy press aide if their office agreed with these groundrules. She acknowledged that the County was following HHS' desired protocol but left unclear if the feds demanded it or merely requested it. Supervisor Solis could have called on HHS to allow independent media access. She didn't.

And we're fed up with euphemisms. Both sites, temporary though they may be, are federally operated detention facilities. The Biden administration and its local allies can't have it both ways: shrugging media restrictions on detention facilities for unaccompanied migrant minors while using media outlets to portray the facilities as happy-face childrens' playgrounds.

In both Long Beach and Pomona, HHS and its local enablers abused the practice of offering "pooled" coverage in which one or two reporters and a photographers get access and allow others to use their text and photos. Pooled coverage is appropriate when physical conditions (e.g. a political fundraiser inside a person's home) don't permit access by a large group of reporters. That wasn't the case on April 22 at the commodious Long Beach Convention Center and won't be so on April 30 at the sprawling Pomona Fairplex.

No, the pool isn't to protect the privacy of migrant children. They weren't present at either location yet. Those two events should never have been pooled. In our view, they were pooled as part of an effort to manipulate press coverage.

In both cases, event organizers offered self-serving politicians access that they denied to most reporters trying to tell you the story. The electeds and their supportive allies toured the Convention Center with two pooled reporters and a pooled photographer (from a single media chain) plus a TV outlet's video. The pols and their supporters then emerged to offer a "press conference" with predictable responses from the supportive politicians and groups.

It was ludicrous. In Long Beach, questions were allowed in person; in Pomona, a media advisory demanded questions in advance. LBREPORT.com used the April 22 opportunity to ask Long Beach's Mayor a quick question about initial White House involvement; he answered but follow-ups weren't allowed and we didn't directly raise the pooled media issue at that time. Neither did others.

But one of our competitors got to the heart of the matter with his question, paraphrased here: How will we be able to confirm whether everything you're promising will actually be provided. he asked. After hearing the tap-danced response, we have no idea.

We told our readers about the manipulative constraints placed on us and others. "A City of Long Beach press event (April 22) didn't allow reporters' access to LB Convention Center areas that will house migrant minors, but gave elected officials and City-selected supportive groups a tour of those areas, offering reporters pooled photos and text from two reporters and a photographer from the Southern CA News Group (chain that includes PressTelegram and Gazettes)" we wrote on April 23.

LBREPORT.com published some of the pooled photos. . 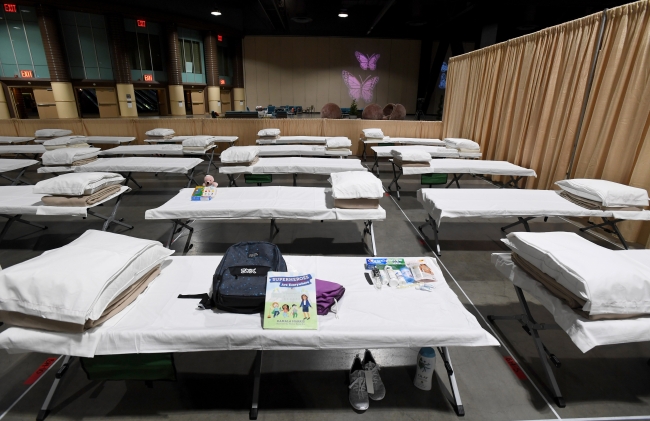 Butterfly image is projected on wall in distance. Brittany Murray SCNG pooled photo. That's one sleeping room, What about others? Are they as large and as pretty? 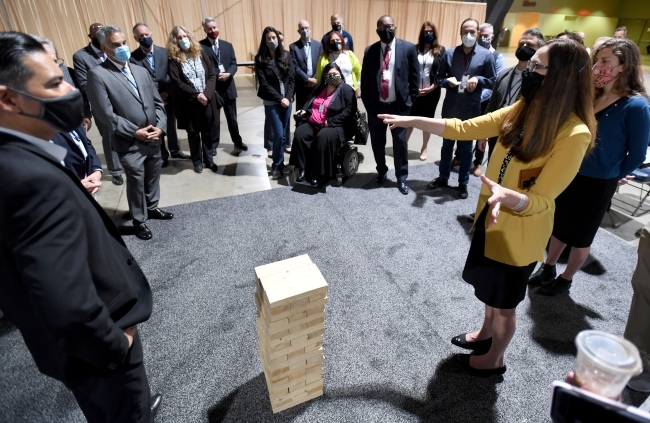 A federal HHS official addresses local electeds and City chosen individuals on their tour. Reporters (other than pool) weren't present so we don't know what she said and what the electeds may or may not have asked. SCNG pooled photo 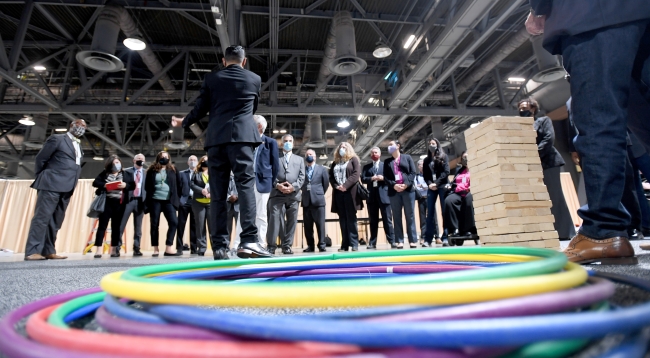 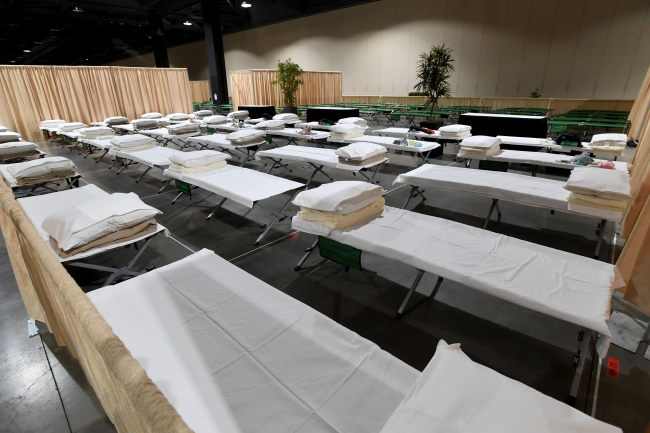 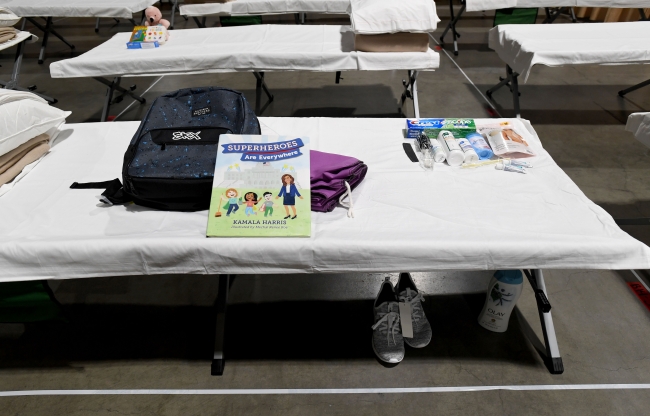 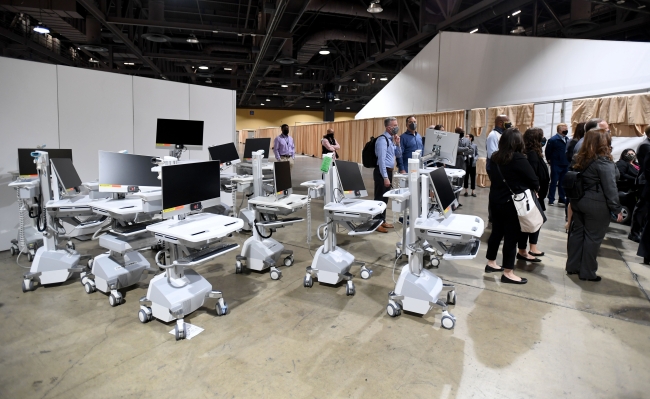 We also published the SCNG pooled text but noted:

It's not immediately clear why reporters were restricted to pooled coverage of the Convention Center facilities., Critics of the Trump administration charged it was putting children in "cages" but when the Biden administration initially faced a surge of migrant minors, independent reporters revealed continuing similar practices. Stung by the whistle-blowing reports, the Biden administration scrambled to make changes (pool reporters saw no Convention Center "cages.") However politically progressive groups (locally including Long Beach Forward locally) have publicly criticized current policies that result in the de facto custody/incarceration of migrant minors...

Now we know this wasn't a Long Beach protocol. It is apparently a Biden administration protocol executed in Long Beach and now being replicated in Pomona. In response to our April 29 inquiry, LA County Supervisor Hilda Solis' deputy press aide acknowledged that the County was following HHS' desired protocol. (She was unclear if the feds demanded this or merely requested it.)

What are they trying to hide? At this point we don't know. But LBREPORT.com, now in our 21st year of providing independent online news coverage, strongly objects to federally-desired locally-enabled actions to control access and manipulate coverage of the temporary Long Beach and Pomona migrant minor detention facilities.

We hope our brothers and sisters in the L.A. and Long Beach press corps will do likewise.

LBREPORT.com isn't done with this story. Local politicians and their enablers won't like where we're going with it but that's too bad. We don't answer to them.

You may see the text from the City of Long Beach's July 23 concluding press release uncritically regurgitated by others. We publish it below in full for the record but for now, LBREPORT.com remains unprepared to say that it fully conveys conditions actually experienced by the migrant minors at the Long Beach facility or fully discloses financial arrangements benefiting the Long Beach entities that participated in it.

Today the City said the operation Long Beach, CA - After reuniting 1,538 migrant children with family members or sponsors from the Emergency Intake Shelter at the Long Beach Convention Center, the U.S. Department of Health and Human Services (HHS) announced today that it is ceasing operations ahead of schedule at the temporary facility today, July 23, 2021.

"I’m incredibly proud of our city for stepping up and welcoming these kids. This humanitarian mission has always been about ensuring the safe reunification of families and we are so grateful for the opportunity to help," said Mayor Robert Garcia.

The Long Beach facility, which opened on April 22, 2021, was one of several emergency shelters set up around the country when the federal government experienced an influx of children at the southern border. The Long Beach Convention Center, which was not being used for public events due to the coronavirus pandemic, was available and could accommodate up to 1,000 children at a time.

Long Beach mostly housed girls ages 5 and older. Most were housed for 19 days on average and had space for recreation and learning while they waited to be connected with family members or sponsors.

"It’s our legal and moral obligation to care for the well-being of unaccompanied children in our care as we work to safely unite them with their parents or with vetted sponsors," said HHS Secretary Xavier Becerra. "Since its opening, the Long Beach Emergency Intake Shelter has been an example of the care we can provide when staff, volunteers, local leaders and neighboring communities come together to support a temporary shelter. I want to extend my gratitude to the staff, the volunteers and all the members of the community who contributed to creating a safe place for unaccompanied children."

To make their stay in Long Beach as comfortable as possible during the reunification process, there was an overwhelmingly compassionate response from the community to provide the young women and children with welcome letters, professional services and basic necessities such as food, toiletries, clothing and baby care items. Approximately 130,000 items were donated, including 30,000 toys. Of that, 16,000 unique items were given to the migrants at the shelter; the rest of the donations were repurposed for other groups in need in the Long Beach area.