-->
Sic TransitNews
Inge Cristiano, Family Matriarch And (With Late Husband Vincenzo) Beloved Operator of Former Iconic Nino's Italian Restaurant If LBREPORT.com didn't tell you,
who would?No one in LBREPORT.com's ownership, reporting or editorial decision-making has ties to development interests, advocacy groups or other special interests; or is seeking or receiving benefits of City development-related decisions; or holds a City Hall appointive position; or has contributed sums to political campaigns for Long Beach incumbents or challengers. LBREPORT.com isn't part of an out of town corporate cluster and no one its ownership, editorial or publishing decisionmaking has been part of the governing board of any City government body or other entity on whose policies we report. LBREPORT.com is reader and advertiser supported. Support independent news in LB similar to the way people support NPR and PBS stations. We're not so it's not tax deductible but $49.95 (less than an annual dollar a week) helps keep us online. (May 16, 2021) -- Inge Cristiano, the indefatigable matriarch of the family that for 58 years lovingly operated Nino's Italian restaurant in Bixby Knolls, has passed away. She was 87. 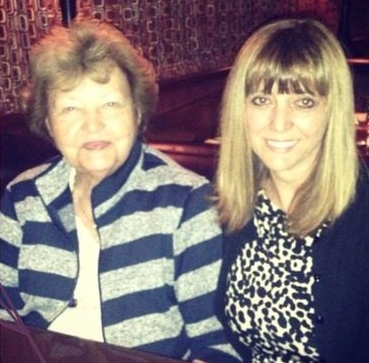 Inge Cristiano with daughter Carina, May 2018.

LBREPORT.com conveyed the sad news yesterday (May 15) on our front page and

Inge's passing reunites her with her late husband Vincenzo, who with their children Carina, Mike and Nino treated their customers as if they were family. Inge and Vince survived WWII in Europe, left to build a new life in a journey that first took them to South America before settling in Bixby Knolls. They brought Long Beach genuine European delicacies without snootiness, accompanying pizza, pasta, meat and seafood specialties with delights including cauliflower pancakes, handmade gnocchi and (if you were lucky on certain days) a hearty pea and carrot soup we haven't had before or since.

Inge and Vince's work drew prominent civic figures (including then-Mayor Ernie Kell) and Hollywood VIPs alongside neighborhood patrons. They were beloved in the community, a genuine American immigrant success story.