If LBREPORT.com didn't tell you,
who would?No one in LBREPORT.com's ownership, reporting or editorial decision-making has ties to development interests, advocacy groups or other special interests; or is seeking or receiving benefits of City development-related decisions; or holds a City Hall appointive position; or has contributed sums to political campaigns for Long Beach incumbents or challengers. LBREPORT.com isn't part of an out of town corporate cluster and no one its ownership, editorial or publishing decisionmaking has been part of the governing board of any City government body or other entity on whose policies we report. LBREPORT.com is reader and advertiser supported. Support independent news in LB similar to the way people support NPR and PBS stations. We're not so it's not tax deductible but $49.95 (less than an annual dollar a week) helps keep us online. (Jan 27, 2021, 10:15 p.m.) -- Hallelujah!

The despised California governor, Gavin Newsom -- he's so despised that's he's inspired a serious recall movement -- has decided to allow restaurants throughout the state to serve food outside in the middle of winter.

I'm sure that's going over big in places like San Francisco and Fresno and Chico, where temperatures often dip into the low 50s during the days and low 40s and even 30s during the evenings. Great dining weather!

Why in tarnation won't he allow the beleaguered culinary outlets in this state to serve customers inside, much like grocery stores, discount stores, appliance stores, hardware stores, liquor stores, even marijuana stores are allowed to do at their establishments.

As been shown in recent court proceedings, there is no data to prove that restaurants have caused Coronavirus outbreaks when they were open for business.

But at last I will be able to actually walk to a Long Beach restaurant from my home- -- what a royal privilege I've been granted from Mr. Newsom -- rather than schlep out to Orange County in my car to Mastro's in Costa Mesa or to the Red O at Fashion Island in Newport Beach.

Alas, there are many LB dining spots who haven't been able to endure these Gavin Newsom lockdowns -- the tony steak house Chianina on 2nd Street in Naples hasn't survived -- and will continue to dangle on the precipice with the strict limitations being imposed on them in the latest re-opening government edicts.

But at least they're back in action.

It'll still be a few more months before his beloved L'Opera will be serving again its Italian delicacies and exotic wines.

Mr. Antonelli long has been one of the most prominent restaurateurs in LB as he once operated four places in the downtown area- --L'Opera, Alegria, The Madison, and the L'Opera Cafe. 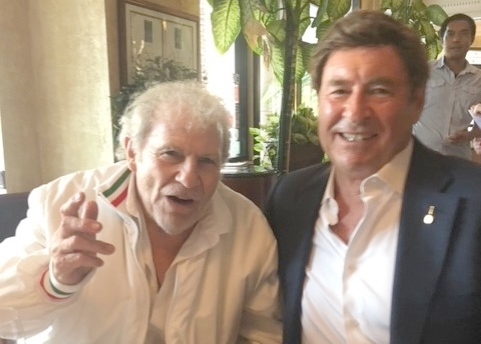 But, as you may recall, L'Opera with its dazzling art that included a $150,000 mural behind the bar and its beautifully crafted interior was the highest-profile victim of the notorious Great Long Beach Memorial Day Pillage & Plunder Festival.

Krikorian Notes: From Mayor Garcia's Spineless Speech To Jill Baker's Passing The Buck Alliance With Gavin Newsom To A Positive Long Beach Vaccination Experience To Welcoming New Neighbor George Gascon To Mike The Hammer Bludgeoning Me About Boxing To The Amazing Tom Brady

The Memorable Life Of Tommy Lasorda: From World Series Titles To Slim-Fast Diets To Obscenity-Laced Jim Healy Tapes To Pitching To Jack Clark To A Sacred Legacy Of Laughter And Success On The Ball Yards Of America "A Lady Shrieking "Wear A Mask!" On Bay Shore Ave. Results In A Mask-Wearing Epiphany For Our Columnist A Christmas Tale Of Reflections And Remembrances A Christmas Tale Of Reflections And Remembrances" Krikorian Notes: From New LA County DA George Gascon Moving To Naples To LBUSD Superintendent Jill Baker Continuing To Stunt Growth Of 70,000 Students To Distress Of Locked Down LB Entrepreneurs Jeff Cozart, Mike Neufeld, John Sangmeister To LB’s Very Own Kato Kaelin, Steve Folger, Squiring Kelly Clarkson In Nashville Krikorian Notes: From Joe Jost Owner Ken Buck Sounding Off On The Lockdowns To Big Ben Goldberg's Boat Parade Party In Huntington Harbor To Bob Ludlam Departing LB For Prescott -- The Leisure World of Arizona -- To LB State President Jane Close Conoley Not Faintly Resembling Her Esteemed Predecessors To Mike (The Hammer) DiMarzo Invading Miami For Nightclub Frolic To LB State Women's Soccer Coach Mauricio Ingrassia Suddenly Looking Like A Matinee Idol When Is LBUSD Superintendent Jill Baker Going To End Her Calamitous Lockdown That Has Caused So Much Chaos And Heartache And Disruption Among 70,000 Students? Krikorian Notes: From Councilman Rex Richardson Displaying Courage To Show Up At A Long Beach Restaurant Association Meeting To The Countless Millions Lost On Unoccupied LB Buses To LB Health Czar Kelly Colopy’s Latest Mean-Spirited Edict To the Irritating Silence Of LB City Manager Tom Modica To LB Mayor Robert Garcia Ignoring His Constituents For Political Reasons To Bob The Black Labrador Parading Down The Peninsula Boardwalk Holding A Large Palm Limb In His Mouth How Many Long Beach Restaurants Will Be Forced to Close After Latest Lockdown Lunacy? Where's Krikorian? Temporarily On "Injured Reserve List" Recovering From Shoulder Replacement Surgery Krikorian Notes: From Nico's George Mlouk Praising LB Mayor Robert Garcia For Working To Help LB Restaurateurs To A Plea To LB Health Czar Kelly Colopy To Restrain Her Overzealous Sleuths To Lakers Deserving NBA Title To LeBron James Turning Anthony Davis Into Passionate Competitor To Vital Contributions Of Lakers Coach Frank Vogel And GM Rob Pelinka To Sadness Of Passing Of The Great Joe Morgan And Its Impact On Maury Wills' Hall Of Fame Chances Famous Long Beach Restaurateur Phil Trani Days Of Joyful Memories And Pandemic Miseries Krikorian Notes: From The Irritating Silence Of The Long Beach Politicians In Not Supporting Their Citizens To The Whereabouts Of LB Mayor Robert Garcia To The Whistles Favoring The Lakers Against The Nuggets To The Greatness of Patrick Mahomes To The End Of A European Vacation Streak That Started In 1989 LBUSD Superintendent Jill Baker’s 70,000 Student Online Virtual Teaching Miscalculation A Disaster! Krikorian Notes: From The 9 Unworthies Of The LB City Council To The LB Upstick In Shootings And Speeding To Restauranteur John Morris Horseback Riding On A Wyoming Mountaintop To The Walking Adventures Of Earth Man Jeff Cozart's Time Of Torment: Will His Belmont Athletic Club Survive Gavin Newsom’s Latest Lockdown? Krikorian Notes: A Labor Day Elegy For Those In The Long Beach Business Community Who Were Violated In The Memorial Day Looting Frenzy To The Palm Tree Limbs Littering 2nd Street To The Scooters Littering The Belmont Shore Bridge To The Virtual On-Line Spectacle At Big Mike O'Toole's Household Krikorian Notes: From Long Beach Mayor's Ascent To Dem Stardom Because Of Lockstep Embrace Of The Party's Policies To The Enchanting Parklet Dining On 2nd Street To Tearing Down The Hoops in Belmont Shore To Greg Silver's LB Departure To Huntington Beach To Bob Rice Protecting Me From Isiah Robertson Don Kramer Was A Character Like No Other With His Zaniness, Goofiness, Joyfulness, Kindliness Who Left All Who Knew Him With Lasting Memories Of Slapstick Antics And Mirthful Anecdotes Krikorian Notes: From Majority Of LB Teachers Skipping Classrooms For The Comforts Of Home To Dr. Jill Baker Becoming Another Maria Montessori To Terry Antonelli Discussing Resurrection of L'Opera To Mayor Robert Garcia Touted By MSNBC's Brian Williams As A Future U.S. Senator To Kershaw's Magical Transformation Long Beach's Renaissance Man, Chuckie Miller, Reflects On His Entrepreneurial Life And On Racial Inequity Krikorian Notes: From LB's Elected Leadership's Reimagining Delusions To the Gaslamp's Outdoor Wall Video Band Show To The Ghastly USC Coach, Clay Helton FDR's Grandson, Delano Roosevelt, Talks Democratic Party, JetBlue, Long Beach And His Life LBPD Chief Robert Luna: Stand Up For Your Fifty Ousted Cops! What Next From Long Beach Health Boss Kelly Colopy, Hazmat Suits For Our Restaurant Servers? Sadly, Our National Pastime No Longer A Pastime For Me Parklets! Three Cheers For Long Beach Politicians! Memo To LBUSD Sup Jill Baker: Return The Kids To the Classroom! A Commute To Work A Joy To This 86-Year Old Gentleman Long Beach Politicians Once Again Fail Long Beach Is Long Beach Destined to Become the City That Never Sleeps? I Never Thought I'd Live To See These... Ben Goldberg Exits Long Beach, Now Nearby Refugee In OC Long Time Long Beach Resident Dave Lopez Climaxes Storied 48-Year TV Career From Krikorian's Notebook: When Will LB Police Chief Luna Come Clean About May 31 Downtown Long Beach Looting Frenzy? From Krikorian's Notebook: (1) LBUSD Mgm't Mulls Keeping K-5 Kids Indoors Without Normal Access To Playground, Cafeteria, Auditorium Activities; (2) And More... Will LB's New School Sup't Allocate Untimely Pay Raise To Serve Students? Awaiting Governor's Dictate To Decide Fate Of This Year's (July 3) "Big Bang On the Bay" Mayor/Council Sounds Of Silence After LB Cops Let Some Pillage Our Village Excuses By Long Beach Police & Politicians Dishearten Damaged LB Businesses Hallelujah! LB Mayor Pleads For Sac'to Permission To Lift Closures That Needn't Have Occurred Speak Up, Mr. Mayor, On Governor's Unwise Edicts. You Can Do That And You Should My Beloved Long Beach: A Victim Of Irrational Government Overreach Beyond Reasoned Response To Virus