If LBREPORT.com didn't tell you,
who would?No one in LBREPORT.com's ownership, reporting or editorial decision-making has ties to development interests, advocacy groups or other special interests; or is seeking or receiving benefits of City development-related decisions; or holds a City Hall appointive position; or has contributed sums to political campaigns for Long Beach incumbents or challengers. LBREPORT.com isn't part of an out of town corporate cluster and no one its ownership, editorial or publishing decisionmaking has been part of the governing board of any City government body or other entity on whose policies we report. LBREPORT.com is reader and advertiser supported. Support independent news in LB similar to the way people support NPR and PBS stations. We're not so it's not tax deductible but $49.95 (less than an annual dollar a week) helps keep us online. (Feb. 3, 2021, 4:30 p.m.) -- While in many other states around the country, there are high school students playing basketball and preparing for baseball and softball and competing in other sporting activities, those in California have been prevented from engaging in such endeavors since last March because the governor, Gavin Newsom, and his health department toadies have deemed the Covid-19 Coronavirus Pandemic too dangerous for such pursuits.

Chaos and disorder now reign foremost in school districts throughout Newsom's domain -- it's conservatively estimated that 60 to 70 percent of these stay-at-home students aren't even seriously participating in it -- and many are emotionally distraught about their current station (suicides among teenagers in this state have risen ominously in recent months).

At least it was for me after navigating 11 years of being thrown into different classes with different classmates with no end in sight to this institutionalized regimen that finally came to a blessed climax in year No. 12 upon high school graduation and with a future that I myself finally would be able to determine.

Still, I have maudlin reminiscences about my final high school year about playing baseball and about my first girlfriend and about drinking Oly (Olympia beer) with buddies and about finally reaching the top of the grade school with older kids no longer above me to assert their meddlesome authority.

Of course, there are thousands, if not millions of parents in this state enraged at Gavin Newsom -- enraged enough for a serious recall movement afoot -- for his shutdown policies.

I wondered just how infuriated this segment of society is, and visited the respected commissioner of the CIF Southern Section, Mr. Rob Wigod, whose organization oversees the inactive athletic teams of 563 schools around Southern California with an enrollment of more than 800,000 students. 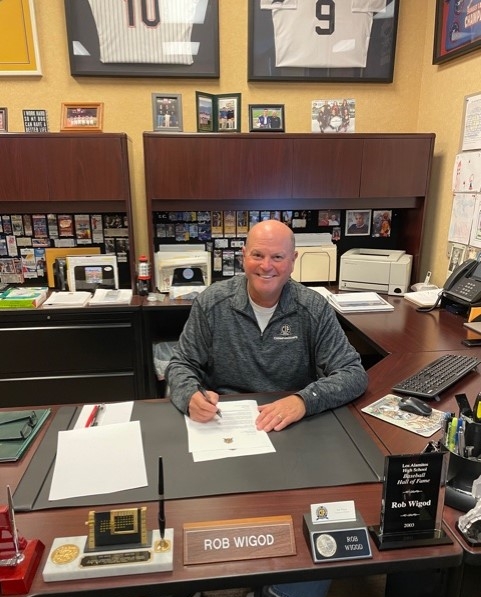 Rob Wigod at his desk at CIF Southern Section office

It turns out Mr. Wigod himself has been besieged in recent months.

"I've been sent nasty text messages and e-mails," he says with a wry smile. "I've been yelled at over the phone. Not a day goes by without these things happening. It's just so frustrating."

He is seated behind his office desk at the CIF's headquarters in Cerritos, and he shakes his head softly.

"So many of these people actually believe the CIF Southern Section is keeping its student athletes from playing sports when nothing could be further than the truth," he says. "The California Department of Health is responsible for it. I want us to go back and play. Of course I do."