If LBREPORT.com didn't tell you,
who would?No one in LBREPORT.com's ownership, reporting or editorial decision-making has ties to development interests, advocacy groups or other special interests; or is seeking or receiving benefits of City development-related decisions; or holds a City Hall appointive position; or has contributed sums to political campaigns for Long Beach incumbents or challengers. LBREPORT.com isn't part of an out of town corporate cluster and no one its ownership, editorial or publishing decisionmaking has been part of the governing board of any City government body or other entity on whose policies we report. LBREPORT.com is reader and advertiser supported. Support independent news in LB similar to the way people support NPR and PBS stations. We're not so it's not tax deductible but $49.95 (less than an annual dollar a week) helps keep us online. (Feb. 8 2021, 7:35 p.m.) -- As the notoriously bumbling Long Beach mayor, Mr. Robert Garcia, and his equally blinkered City Council accomplices spend their invaluable time shrinking the LB police department and inspiring closurers of supermarkets with their anti-business shenanigans, they also continue to blithely ignore the ominous rise in crime and the rampant homeless mischief in the community.

I came across the aftermath of the latter on Bay Shore Avenue in Belmont Shore last Friday as I was taking my daily morning walk and noticed five police cars pulling away from a home between Division and 2nd.

As I came upon the scene, I saw a couple of ladies seated in its front yard, and asked them the reason for the presence of so many custodians of the law.

"A homeless guy broke into my mom's home here, and the police found him trying to take a shower in my mom's upstairs bathroom," said Nicole Benjamin.

Her mother, Dorcas Baldwin, was seated next to her, and, understandably, was in an agitated state. 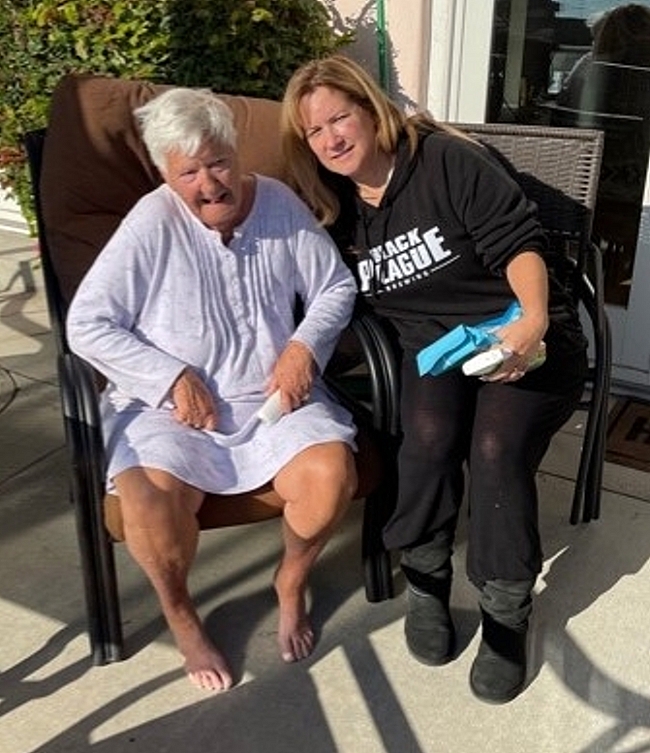 "Very, very frightening experience," said Ms. Baldwin, an 85-year-old retired Norwalk elementary teacher as she kept nervously shaking her head.."I was in my bed upstairs, and started to hear noise downstairs. My daughter lives nearby on Santa Ana, and I figured it might be her.

`I kept saying, `Hello. . .hello. . .hello. . .' But there was no answer, and when I heard someone walking up the stairs, I went out into the balcony, and dialed 911 on the phone, and looked over and could see a blurry image of a guy walking into my bathroom.

"I was put on hold, and I heard music for a couple of minutes. And then a lady came on, and I told her that someone had broken into in my house. She started asking me all sorts of questions like what did he look like and what was he wearing, stuff like that. Well, I'm legally blind, and I kept telling her I don't see well and I think he's a skinny older white guy, and that's all I know for sure is that he has broken into in my home."

Within moments, the police had arrived, and were escorting the handcuffed intruder downstairs wrapped in a towel.

"After she hung up with the 911 operator, she immediately called me and I rushed over from my nearby Santa Ana Avenue residence," said Nicole Benjamin. "I got there just in time to see the homeless guy and heard him saying to the police, 'You can't arrest me. I don't want to be arrested.' And I thought to myself, `What?' I mean, the guy just broke into someone's home.

"And then I heard one of the cops talking on a phone to a superior, I guess at police headquarters, and she was saying,'What, we can't arrest him? Are you kidding? The guy committed a felony breaking into a person's home and damaging a door.' At least they took him away in one of the police cars."