Doug Krikorian / Viewpoint
The Beloved Sandra Headley, AKA Coachie, Climaxes Her Memorable 39-Year Tenure At Naples Elementary School With A Most Unusual Task

If LBREPORT.com didn't tell you,
who would?No one in LBREPORT.com's ownership, reporting or editorial decision-making has ties to development interests, advocacy groups or other special interests; or is seeking or receiving benefits of City development-related decisions; or holds a City Hall appointive position; or has contributed sums to political campaigns for Long Beach incumbents or challengers. LBREPORT.com isn't part of an out of town corporate cluster and no one its ownership, editorial or publishing decisionmaking has been part of the governing board of any City government body or other entity on whose policies we report. LBREPORT.com is reader and advertiser supported. Support independent news in LB similar to the way people support NPR and PBS stations. We're not so it's not tax deductible but $49.95 (less than an annual dollar a week) helps keep us online. (May 3, 2021, 6:05 p.m.) -- It is all now so different, a strange tableau of millions of human beings adorn in masks which once upon a time were the sole province of Batman, Zoro and the Lone Ranger as well as stickup guys and professional wrestlers.

It is all now so different, as flights to vacation spots outside America force tourists to take Covid-19 tests 72 hours before departure and flights to iconic European destinations aren't even allowed.

It is all now so different, where vaccination prate dominates everyday conversation, where certain state governors of a certain political bent institute suffocating lockdowns to the horror of so many constituents and business outlets, where the national media prop up self-styled Coronavirus "experts" who so often have been, to coin a phrase, hoisted by their own petard.

It is all now so different, where near vacant office buildings have given way to stay-at-home employees who do their chores via zoom, where housewives boycott malls in favor of Amazon Prime, where cherished statues have been razed, where looters too often avoid punishment for their vile crimes, where nary a day passes without a police misdeed somewhere coming under widespread microscopic scrutiny when thousands upon thousands of other misdeeds around the country are blithely ignored.

It is all now so different for all of us as we alter hallowed habits and adjust to a dramatically changing everyday existence that oftentimes seems bizarre, if not downright weird.

And no one can attest to this phenomena more than a beloved figure at Naples Elementary School named Sandra Headley, a 39-year fixture at the institution who long has overseen playground activities for many generations of kids.

Although she normally puts in a full-day's work as both a part-time employee---she earns wages for three hours---and a volunteer, Ms. Headley, 75, plans to retire at the end of the school year in which her main duty these days is unlike anything from the past when she helped keep order on the asphalt basketball courts, monkey bars, swings, slides, etc.

She now can be found each morning between 7:45 and 8:05 at the back gate on St. Ermo taking the temperatures of students between the third and fifth grades. 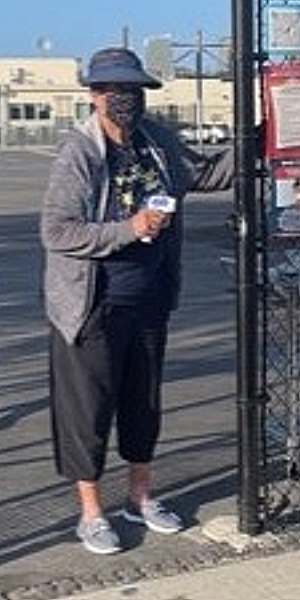 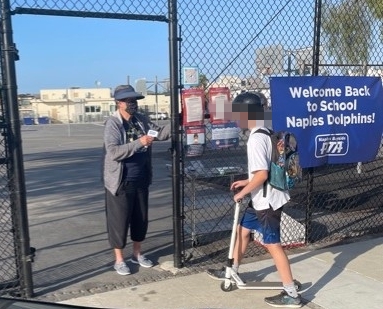 The ad space immediately above donated by LBREPORT.com -- Previously by Mr. Krikorian:

Long Beach Mayor Robert Garcia Takes A Victory Lap For His City Hosting The Undocumented Migrants, But The Estimated $35 Million Cost To Taxpayers Has His Critics In An Uproar, Including One, The Famed Bodyguard Mike (The Hammer) DiMarzo, Who Calls Mr. Garcia The Teflon Don Of LB