Doug Krikorian / Viewpoint
A Thrilling Evening In Long Beach When The Skies Above Alamitos Bay Became A Dazzling Palette Of Exploding Rockets In Front Of 30,000 Witnesses Who Savored What Will Become Part Of The City’s Sacred Lore

If LBREPORT.com didn't tell you,
who would?No one in LBREPORT.com's ownership, reporting or editorial decision-making has ties to development interests, advocacy groups or other special interests; or is seeking or receiving benefits of City development-related decisions; or holds a City Hall appointive position; or has contributed sums to political campaigns for Long Beach incumbents or challengers. LBREPORT.com isn't part of an out of town corporate cluster and no one its ownership, editorial or publishing decisionmaking has been part of the governing board of any City government body or other entity on whose policies we report. LBREPORT.com is reader and advertiser supported. Support independent news in LB similar to the way people support NPR and PBS stations. We're not so it's not tax deductible but $49.95 (less than an annual dollar a week) helps keep us online. (July 5, 2021) -- It was a night of exquisite joy and glad fraternity among those in the armada of USA flag-bearing vessels of all sizes on Alamitos Bay and among those frenzied souls in the nearby restaurants and homes that joined in the communal revelry of patriotic spirit. 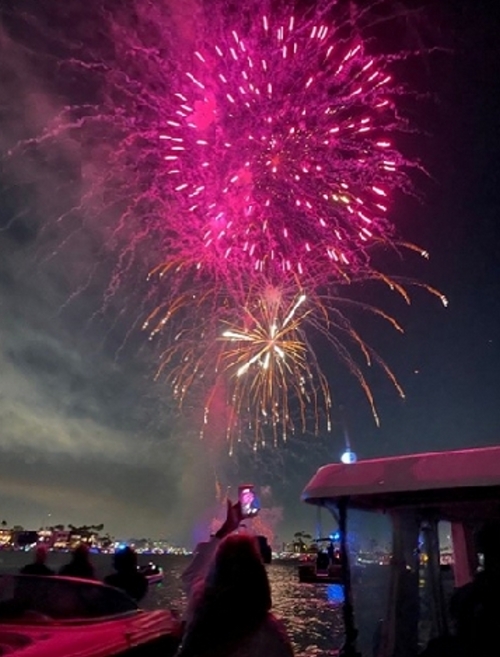 It was a night when the skies above this bacchanalian scene of exultant shrieks and excessive culinary and alcoholic consumption turned into a vast kaleidoscopic palette of exploding rockets and sparklers that turned the ether into a recurring spectacle of pictorial beauty. 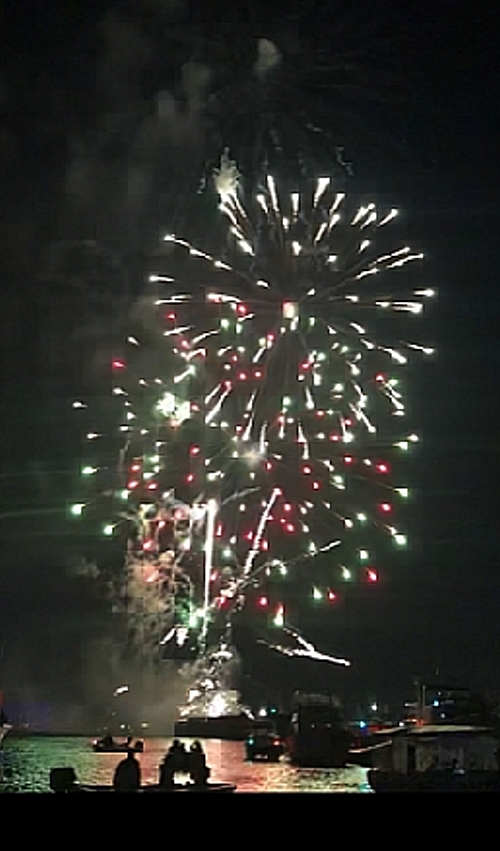 It was a night when the darkness of the Great Pandemic was forgotten by those immersed in the brightness of the grand festival unfolding loudly and entertainingly in front of them that for the 20 minutes of this incredible show of pyrotechnic explosions all one heard were the oohs and ahhs of those who witnessed it.