Doug Krikorian / Viewpoint
Squib From Berlin: I Always Will Have A Passion For Berlin, Despite My Now Being Officially Affiliated With The EU And Being Tracked By An APP Called Luca Because Of My Presence In The Great City

Ed note: Doug Krikorian is in Europe and sends this squib (short piece)

(Berlin, Germany -- Nov. 25, 2021) -- I love Berlin, always have, always will, ever since the first time I arrived here on Friday, November 10, 1989, one day after the green-glad East German soldiers guarding the infamous Berlin Wall were ordered by the then Russian leader Michael Gorbachev not to shoot those seeking to trespass the vile 13-foot structure that split this city in half for 28 years.

It was a weekend of gladness and cheerfulness that I never will forget as more than one million East Germans walked across the border or rode across in their much-ridiculed two-stroke, 26-horsepower, plainly uncomfortable car known as the Trabant that took 21 seconds to reach its top speed of 60 mph.

What a time I had shaking hands with East German guards, pounding pieces of the wall with a hammer I purchased -- all of which I’ve given away across the years -- and uttering a lot of toasts to peace and tranquillity and consuming way too much alcohol with a lot of deliriously happy, celebrating and weeping Germans who found the sudden event wildly surreal.

Ever since then, I’ve made it an annual pilgrimage to spend a few days here during my European visits, and I still have a deep fondness for a city that was totally rebuilt after being destroyed during World War II.

I always stay at the Hilton Hotel in the Gendarmenmarkt district that’s near what is known as Museum Island, and across from the Hilton always has been my favorite Christmas Market known as Weihnachts Zauber. 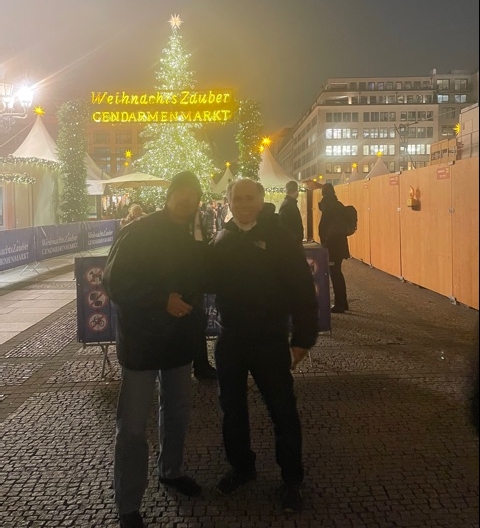 Doug Krikorian (right) and his pal/bodyguard Thirsty Tom Kelley, in front of Weihnachtst Zauber in Berlin

And, blessedly, it’s actually open, although if the outgoing Chancellor, Angela Merkle, had her way, she says she would have shut it down like the Christmas Markets are in the Bavarian city of Munich because of the rise in Covid-19 cases in recent weeks throughout Germany.

Actually, Ms. Merkle has said she would have shut down the entire country, but her successor, a gentleman named Olaf Schulz, hasn’t yet followed that radical course.

Still, The Pandemic certainly has had an effect on me here, as I’m now the proud possessor after much investigation and maneuvering of an EU Digital Covid Certificate, which can be scanned for entrance to any restaurant in Europe to show proof that I’ve had three vaccinations and that, I guess, I’m sound of mind, body and soul.

And if that wasn’t enough -- I never dreamed I’d ever hold an app that connects me to the far left-leaning European Union -- but I also have something called a Luca app in my Apple 12, which when scanned is a way for authorities to know where I have been hanging out.

And here I thought spying in these parts once perpetrated by the dreaded Stasi of East Berlin notoriety went out with the fall of the Wall.

Of course, I’m only kidding.

Doug Krikorian Squib from Copenhagen: The Danes Have Tossed The Masks In The Baltic Sea