If LBREPORT.com didn't tell you,
who would?No one in LBREPORT.com's ownership, reporting or editorial decision-making has ties to development interests, advocacy groups or other special interests; or is seeking or receiving benefits of City development-related decisions; or holds a City Hall appointive position; or has contributed sums to political campaigns for Long Beach incumbents or challengers. LBREPORT.com isn't part of an out of town corporate cluster and no one its ownership, editorial or publishing decisionmaking has been part of the governing board of any City government body or other entity on whose policies we report. LBREPORT.com is reader and advertiser supported. Support independent news in LB similar to the way people support NPR and PBS stations. We're not so it's not tax deductible but $49.95 (less than an annual dollar a week) helps keep us online. (April 19, 2021, 8:25 a.m.) -- The City Council is scheduled to hold a "study session" (5:30 p.m. durng its April 20 meeting) hear what it calls "Strategies for Addressing Violent Crime."

There's no written material accompanying the agenda item (allowing the public to study and prepare comments on what's being studied) but we expect to hear Long Beach Police Chief Robert Luna reiterate his March 17 memo (previously reported by LBREPORT.com here) blaming the effects of the COVID-19 pandemic, not Council-thinned police levels. Council budget actions between 2009-2014, worsened by a Sept. 2020 defunding, have collectively left LB taxpayers with roughly 20% fewer police officers than the City previously provided.

"We believe the possible cause for these crime increases are [sic] related to the serious impacts on the criminal justice system and our community resulting from the COVID pandemic," Chief Luna wrote. "Prisons and jails have released large numbers of inmates to reduce the risk of exposure; more repeat offenders are being released on bail; trials and other court proceedings have experienced significant delays; school closures and lack of programming has negatively impacted youth engagement; and, with a record number of gun sales in 2020, there are more guns on the street. The pandemic has also created an inability for the Police Department (Department) to engage our community in person, which has negatively impacted our community policing efforts."

The Council, which determines police levels for taxpayers when it adopts City Hall's annual budget, requested Chief Luna's March 17 memo on February 2, prompted by increased shootings. Councilmembers sought a report "within 30 days on violent and quality-of-life crime in Long Beach with an overview of incidents and trends, an outline of current efforts and opportunities to address violence in highly-impacted neighborhoods, and a plan of action to meet the need for safety in all of our communities."

The resulting memo doesn't mention the word "gangs." Or acknowledge policy actions by prior and current Mayors/Councils that have collectively erased over 200 police officers, including LBPD's former field anti-gang unit, that the City previously had,.

The Chief's memo, titled "Strategies for Addressing Violent Crime" doesn't mention LBPD's practice (without Council objection) of failing to publicly list shootings in LB's official crime statistics (which LAPD does.) Or the City's failure (without Council objection) to provide the crime stats that list serious (Part 1) crimes against persons and property by Council districts (allowing quick comparison of conditions in various Council districts,) 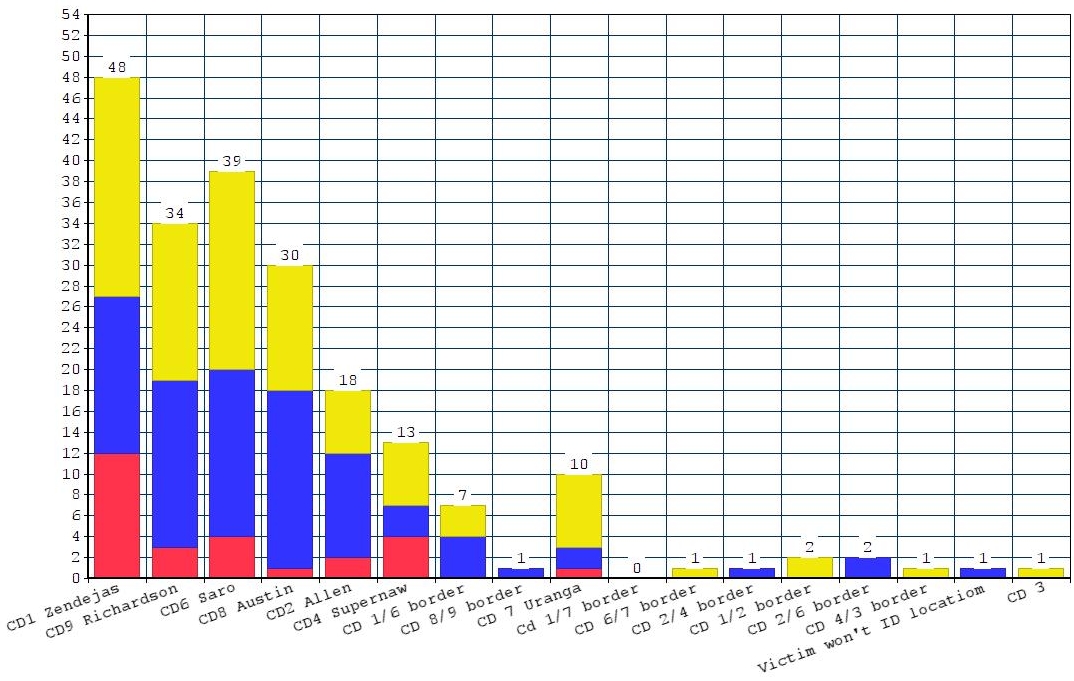 In Depth / Amnesia File: Long Beach Had But No Longer Has An LBPD Field Anti-Gang Unit. How'd That Happen?