Who Did He Say Contacted Whom First About Using Convention Ctr? Hear Garbled Digital Audio

If LBREPORT.com didn't tell you,
who would?No one in LBREPORT.com's ownership, reporting or editorial decision-making has ties to development interests, advocacy groups or other special interests; or is seeking or receiving benefits of City development-related decisions; or holds a City Hall appointive position; or has contributed sums to political campaigns for Long Beach incumbents or challengers. LBREPORT.com isn't part of an out of town corporate cluster and no one its ownership, editorial or publishing decisionmaking has been part of the governing board of any City government body or other entity on whose policies we report. LBREPORT.com is reader and advertiser supported. Support independent news in LB similar to the way people support NPR and PBS stations. We're not so it's not tax deductible but $49.95 (less than an annual dollar a week) helps keep us online. (April 27, 2021, 5:50 p.m.) -- On April 27, Mayor Robert Garcia was one of four witnesses testifying in a virtual hearing of the House Subcommittee on Border Security, Facilitation, and Operations, part of the House Homeland Security Committee. 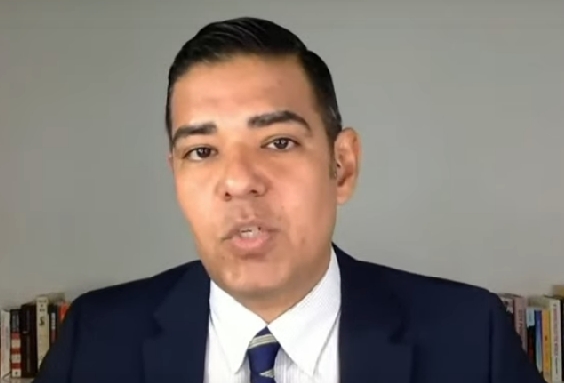 Mayor Garcia said the Convention Center use must be temporary and said he favors changes in current immigration law (which he called "broken.") He advocated a "clear and fair pathway for citizenship" for undocumented persons including "dreamers," those in the military (who he said should go to the front of the line.) He said the changes would be posktkve and transformational.

During his virtual (digital) testimony, Mayor Garcia sounded at one point as if he or his office had initially reached out to the White House, and not vice versa, in offering use of the city's Convention Center to temporarily house migrant minors...but it's garbled, not clear, possibly due to digital sound distortion. We include the audio clip and our unofficial transcript and invite our readers to listen and decide.

"Sure thing. We our [unclear] reached out by the administration to see if it would be interested in hosting this emergency shelter. Long Beach with a history of a compassionate viewpoint with refugees, and with immigrants, brought it forward to the Long Beach City Council which voted unanimously to move forward..."

The unclear word starting with "our" sounds like "our salary," which makes no sense. We speculate the word might be "ourselves," which would be consistent with Garcia's use of the word "it" in having asked if the administration ("it)" was interested in hosting a shelter at the Convention Center.

Or it might be a garbled version of "sought out" or "reached out" which would be consistent with Garcia using the preposition "by" the administration...but would be inconsistent with his subsequent use of the term "it" (about his city.) ."

[As W.C. Fields once quipped as a charcter trying to lure a crowd as a carnival barker:"It baffles science."]

To be clear: The federal Dept of Health/Human Services hosts and operates the migrant minors' shelter in Long Beach and in other locations. It leased the Long Beach premises from city's Convention Center operator.

During reporters' Q & A at an April 22 Convention Center press event, LBREPORT.com sought to clear up the ambiguity. We asked Mayor Garcia exactly who contacted whom first (see transcript below) and he indicated the White House office (through its office of Government Relations) first contacted Garcia's office.

LBREPORT.com: Bill Pearl, LBREPORT.com. I'd like to get some clarity on the White House aspect of this from the Mayor. Exactly who contacted whom initially on this? Who were the parties to that conversation, email or by phone, when did it take place and who handled the follow-up if any?

Mayor Garcia: Sure. I think the question was about who on the White House side came in contact with the City.....

LBREPORT.com [interrupts to stress who initiated contact] : Who initiated the conversation?

Mayor Garcia: Sure. I don't recall the exact person. I believe, uh, uh, the initial conversation was from the White House Office of Government Relations, which is typical for programs like this. Initial email, phone call came to our office...

Listen to the April 27 audio above. We welcome your suggested interpretation and reasoning. .