The agreement was reached between the Hawthorne based firm and the Port of Long Beach, approved by LB Harbor Commissioners this afternoon.

Space X's presence is tangentially a space related development; it's basically using part of a Port marine terminal -- Pier T, once the site of the historic, controversially demolished, former U.S. Navy Station -- to dock its vessels and offload equipment. 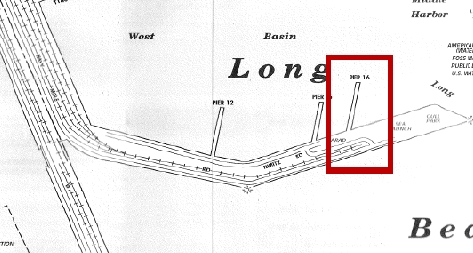 This proposed action requests the Board of Harbor Commissioners to authorize the Executive Director to execute a Sublease granting Space Exploration Technologies Corp. (SpaceX) use of approximately 2.85 acres of land, 3.54 acres of submerged land, and improvements thereon including a standalone pier structure and mooring island extending 1,168 linear feet offshore commonly known as Pier 16 and 65,894 square feet of warehouse and office space...

The proposed Sublease provides for a two-year term, commencing May 1, 2021, and authorizes SpaceX to use the premises for berthing of ships, barges, and other watercraft, and related activities in regards to their recovery operations of spacecraft launch equipment at sea, including offloading of equipment by crane.

Among its key points:

The Sublease premises consists of approximately 2.85 acres of land, 3.54 acres of submerged land, and Port -owned improvements situated thereon that include Pier 16 and 65,894 square feet of office and warehouse space...

The term of the Sublease is two (2) years, commencing May 1, 2021, and terminable by SpaceX at any time upon 90 days’ written notice.

SpaceX shall use the Sublease premises for berthing of ships, boats, barges, and other watercraft, offloading of equipment, and storage of equipment in relation to its operations.

A Port of Long Beach release said it has been "actively looking for a new tenant since the previous occupant, Sea Launch, departed in February 2020." Port of LB Executive Director Mario Cordero commended the Port's team, including its developing the agreement with SpaceX.