-->
News
North Wrigley Cops Coax Restraining Order Suspect Off Rooftop If LBREPORT.com didn't tell you,
who would?No one in LBREPORT.com's ownership, reporting or editorial decision-making has ties to development interests, advocacy groups or other special interests; or is seeking or receiving benefits of City development-related decisions; or holds a City Hall appointive position; or has contributed sums to political campaigns for Long Beach incumbents or challengers. LBREPORT.com isn't part of an out of town corporate cluster and no one its ownership, editorial or publishing decisionmaking has been part of the governing board of any City government body or other entity on whose policies we report. LBREPORT.com is reader and advertiser supported. Support independent news in LB similar to the way people support NPR and PBS stations. We're not so it's not tax deductible but $49.95 (less than an annual dollar a week) helps keep us online. (April 30, 2021, 7:00 p.m.) -- North Wrigley residents saw police activity at midmorning Friday April 30 (unofficially about a half dozen police cars plus LB fire and paramedic units) after a man suspected of violating a restraining order climbed onto a rooftop and it took LBPD commands to get him down. 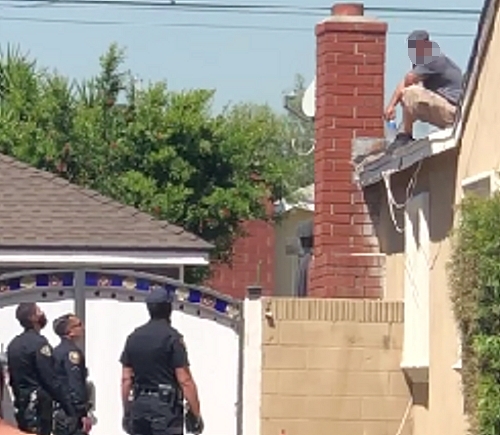 Screen save by Carlos Ovalle

LBPD Public Information Officer Richard Mejia says that at about 10:50 a.m., officers were sent to the 3100 block of Golden Avenue regarding an alleged restraining order violation. On arrival. they contacted a 58 year old woman with no injuries who said a man, possibly under the influence of drugs, was behaving violently in her home.

Officers spotted the suspect on the roof, gave him commands to come down..and he ultimately complied. 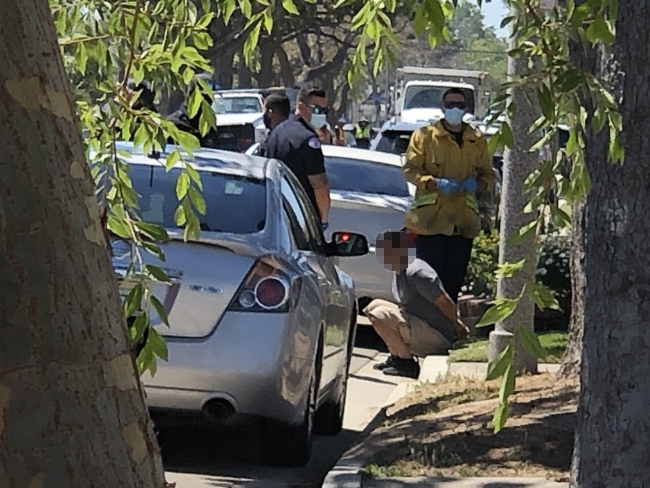 Screen save by Carlos Ovalle

LBFD transported the suspect, a 33 year old Long Beach man, to a hospital to be cleared for booking, and he was subsequently booked on suspicion of a restraining order violation and held on $20,000 bail.