AB 725 will require metro cities like LB after Jan 1, 2022 to allocate at least 25% of their SCAG-imposed "Regional Housing Needs" (moderate income and above) to sites zoned for at least four housing units.

If LBREPORT.com didn't tell you,
who would?No one in LBREPORT.com's ownership, reporting or editorial decision-making has ties to development interests, advocacy groups or other special interests; or is seeking or receiving benefits of City development-related decisions; or holds a City Hall appointive position; or has contributed sums to political campaigns for Long Beach incumbents or challengers. LBREPORT.com isn't part of an out of town corporate cluster and no one its ownership, editorial or publishing decisionmaking has been part of the governing board of any City government body or other entity on whose policies we report. LBREPORT.com is reader and advertiser supported. Support independent news in LB similar to the way people support NPR and PBS stations. We're not so it's not tax deductible but $49.95 (less than an annual dollar a week) helps keep us online. (Aug. 29, 2020. 10:55 p.m.) -- As flashed on LBREPORT.com's front page and our Facebook channel earlier today (Aug. 29), on an initial tally state Senate Democrats -- including LB state Senators Lena Gonzalez and Tom Umberg -- voted "yes" and provided 21 votes sufficient to pass AB 725. a pro density housing bill that is a companion to closely watched pro-density SB 1120 (requiring cities to allow four housing units on single family lots). SB 1120 is expected to come to a decisional Assembly vote on Sunday (Aug. 30). 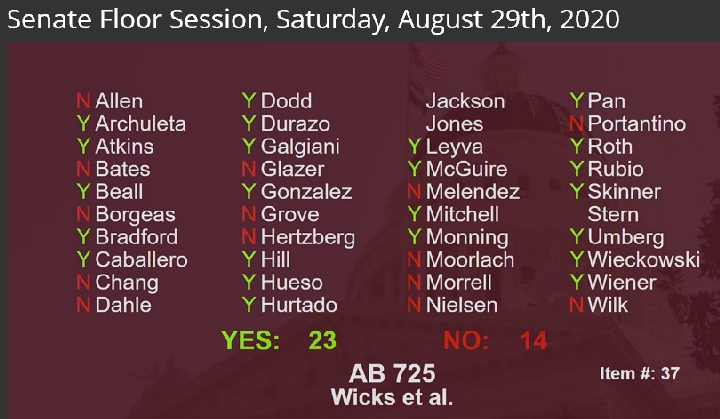 AB 725 -- full text here -- requires metropolitan cities (like LB) after Jan. 1, 2022 to show that at least 25% of their regional housing needs assessment allocation (in So. Cal set by SCAG) for moderate-income housing is allocated to sites with zoning allowing at least 4 housing units (but not more than 100 units per acre.)

AB 725 also requires metropolitan cities to allocate at least 25% of their share of SCAG's regional housing need for above moderate-income housing to sites zoned to allow at least 4 units of housing. .

If that doesn't happen and an Assembly majority approves AB 725 as amended by Aug. 31, it goes to Gov. Gavin Newsom who can approve it or veto it (and there's no indication that he opposes it.)