If LBREPORT.com didn't tell you,
who would?No one in LBREPORT.com's ownership, reporting or editorial decision-making has ties to development interests, advocacy groups or other special interests; or is seeking or receiving benefits of City development-related decisions; or holds a City Hall appointive position; or has contributed sums to political campaigns for Long Beach incumbents or challengers. LBREPORT.com isn't part of an out of town corporate cluster and no one its ownership, editorial or publishing decisionmaking has been part of the governing board of any City government body or other entity on whose policies we report. LBREPORT.com is reader and advertiser supported. Support independent news in LB similar to the way people support NPR and PBS stations. We're not so it's not tax deductible but $49.95 (less than an annual dollar a week) helps keep us online. (Aug. 9, 2021, 8:35 p.m.) -- With a gold medal dangling conspicuously from her neck, the most prolific USA women's water polo goal scorer in Olympic Games history, Maggie Steffens, attracted a lot of attention from 2nd Street pedestrians Monday afternoon in Belmont Shore as she, her boyfriend and her father sipped beers and ate chicken wings in the front patio at Legends.

They were joined by Big Mike O'Toole, a friend of Maggie whose sister, Maureen O'Toole, coached her at the Diablo water polo club when she was growing up in the Northern California hamlet of Danville. 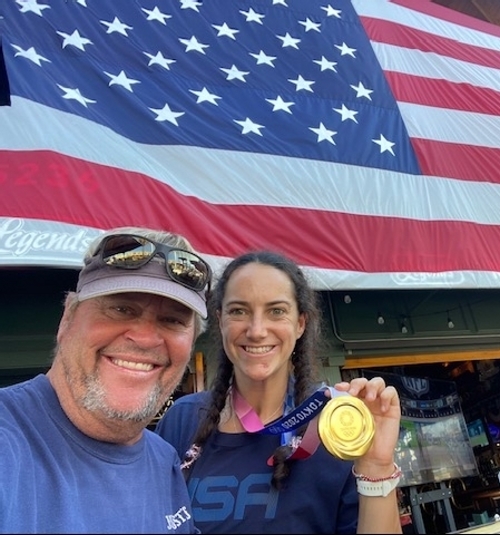 USA Water Polo Star Maggie Steffens shows off the gold medal she and her teammates won over the weekend at the Tokyo Games. Seated next to her at Legends is the Naples Gondola Gateway's Big Mike O'Toole.

``Maggie called me today from Legends, as she had just flown in from Tokyo,'' related Mr. O'Toole. ``I couldn't believe the reaction people had as they walked by Legends and noticed Maggie's Olympic gold medal. Before you knew it, people were lining up to take pictures with her and wanting an autograph. It was an amazing sight. And, of course, she was very accommodating.''

Ms. Steffens, a 28-year-old Stanford graduate who resides in Belmont Shore, has scored a record 56 goals during her three gold medal-winning Olympic Game appearances, and climaxed her career with a single goal Saturday when her team beat Spain 14-5 in the championship match.