Action Moves Bill Within One Vote Of Reaching Governor Newsom; Mayor/Council Let Bill Advance Since Dec. 2020 With No Public Discussion Or Opposition

If LBREPORT.com didn't tell you,
who would?No one in LBREPORT.com's ownership, reporting or editorial decision-making has ties to development interests, advocacy groups or other special interests; or is seeking or receiving benefits of City development-related decisions; or holds a City Hall appointive position; or has contributed sums to political campaigns for Long Beach incumbents or challengers. LBREPORT.com isn't part of an out of town corporate cluster and no one its ownership, editorial or publishing decisionmaking has been part of the governing board of any City government body or other entity on whose policies we report. LBREPORT.com is reader and advertiser supported. Support independent news in LB similar to the way people support NPR and PBS stations. We're not so it's not tax deductible but $49.95 (less than an annual dollar a week) helps keep us online. (Aug. 27, 2021, 3:50 a.m.) -- As flashed on LBREPORT.com's front page and Facebook platform on Aug. 26, the Assembly has voted 44-16 to approve SB 9, full text as most recently amended here, which would require cities of LB's size to approve splitting single family home lots to allow four dwelling units (potenially up to eight with separate City Hall approval.) It also prohibits requiring parking to match the increased density within a half mile of "a high-quality transit corridor" or a "major transit stop" as defined in state law. The bill exempts state specified historic districts. 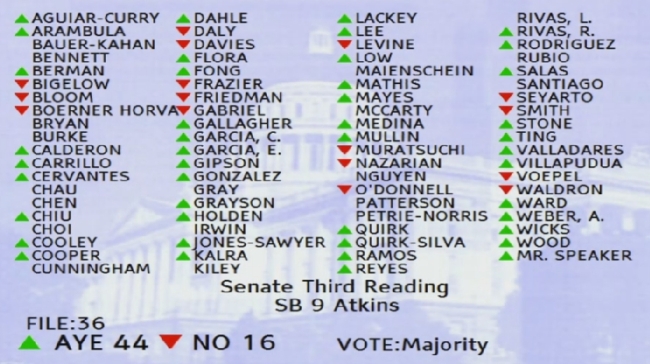 Since Dec. 2020, LB Mayor Garcia and every LB City Council incumbent refused pleas by LB neighborhood groups to agendize SB 9 for public discussion and voted action on a City of LB position.

SB 9 now returns to the state Senate for agreement in Assembly amendments and then goes to Gov. Newsom who could sign it into law or veto it.

As of June 22 (prior to the amendments), SB 9 had the following registered supporters/opponents in the Assembly Housing and Community Development Committee.

Price's letter contended that the City of Long Beach has made "significant, good faith progress to improve housing policies with the goal with the goal of creating an environment conducive to more housing development but does so in a way that considers the unique local circumstances and environment of our city." It requests "that you [state lawmakers] consider appropriate changes to SB 9 with the intention of eliminating unintended consequences that harm communities where good faith and meaningful progress is being made on housing. Perhaps one incentive for cities that are making progress would be would be to allow more autonomy and discretion for future development projects...I defer to you on how that balance could be reached but I hope you will consider something along those lines as the discussion moves forward."