If LBREPORT.com didn't tell you,
who would?No one in LBREPORT.com's ownership, reporting or editorial decision-making has ties to development interests, advocacy groups or other special interests; or is seeking or receiving benefits of City development-related decisions; or holds a City Hall appointive position; or has contributed sums to political campaigns for Long Beach incumbents or challengers. LBREPORT.com isn't part of an out of town corporate cluster and no one its ownership, editorial or publishing decisionmaking has been part of the governing board of any City government body or other entity on whose policies we report. LBREPORT.com is reader and advertiser supported. Support independent news in LB similar to the way people support NPR and PBS stations. We're not so it's not tax deductible but $49.95 (less than an annual dollar a week) helps keep us online. (December 24, 2019) -- LBREPORT.com has learned that LB's 1st Council district has had another shooting. On Sunday night Dec. 22, a man was shot/wounded in the area of 16th St./Linden Ave. (one block west of Atlantic, one block south of PCH.)

It's the second 1st dist. shooting in roughly 72 hours (on Dec. 19, a man was shot/wounded in the 900 block of E. 7th St.) and the fifth (person-hit plus no-persons-hit) since Councilwoman Mary Zendejas was elected on Nov. 5.

LBPD Public Information Officer Jennifer De Prez tells LBREPORT.com that on December 22 at about 6:20 p.m., officers responded to reports of a shooting and located a man (adult) with a gunshot wound in the 500 block of E. 16th St. (area 16th/Linden.) LBFD transported him to a hospital in critical condition.

Preliminary information indicates the victim was in the 500 block of E. 16th St. when a man (adult) shot him. The suspect fled the scene in a vehicle and remains outstanding; as is now routine in non-fatal shootings, LBPD gang detectives responded and are investigating. . 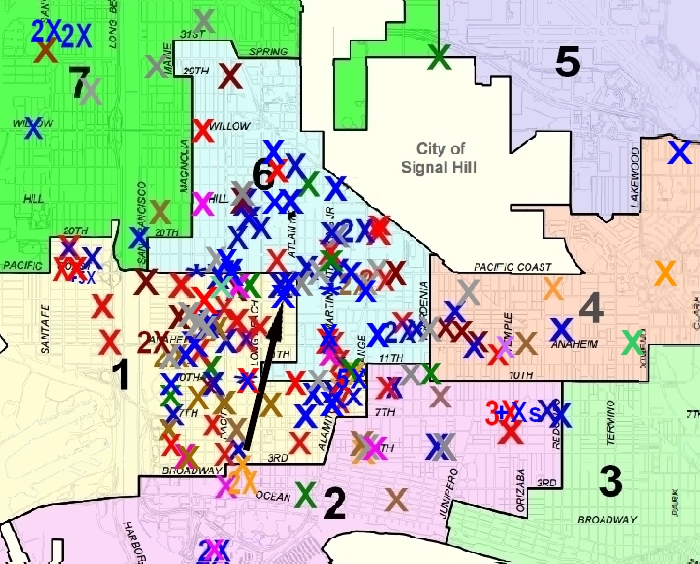 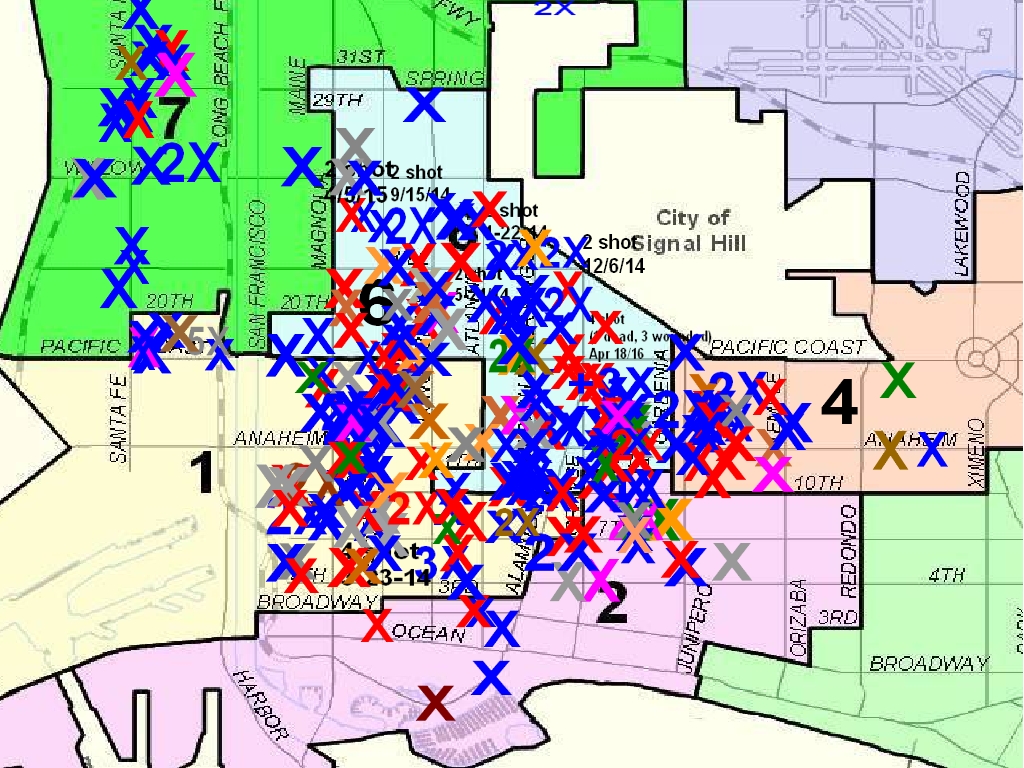 A little over a week earlier on Dec. 14, a woman (adult) reported someone had shot at her unoccupied parked vehicle overnight in the 1700 block of Pine Ave. (just south of PCH) and police confirmed finding gun casings at the location. That came less than a week after a Dec. 9, no-person-hit shooting with bullet casings found in the 1500 block of Chestnut Ave. On Nov. 22, a man was shot to death in the 1500 block of Henderson St. And on Nov. 20, a no-person-hit shooting occurred in the 1400 block of Chestnut Ave.

From December 1 through Dec. 19, Long Beach's LB's 1st and 6th Council districts combined, had more non-fatal shootings per capita than Chicago. (During this period, most were in the 6th dist.; LBREPORT.com coverage here.)

From Nov. 1 through Dec. 1, LB's mainly working class 1st and adjacent 6th Council districts combined experienced a per capita shooting total that approached that of Chicago (during this period ,most were in the 1st dist, LBREPORT.com coverage here.)

The 1st and 6th districts stretch from West LB through northern downtown LB and into Central LB and Cambodia Town. They are disproportionately working class areas with historically disadvantaged populations.

1st dist. Councilwoman Zendejas was elected with fewer than 900 votes cast in a multi-candidate no-runoff Nov. 5 special election in which her campaign (with the endorsements of LB Mayor Robert Garcia, immediate past 1st dist. Councilwoman (now state Senator) Lena Gonzalez and the LB police officers union) spent over $100,000 to elect her. Her term now runs through at least Dec. 2022, after which she may seek three additional terms (12 additional years) without a write-in requirement for her third term (under Garcia/Doud proposed, Council advanced, voter-enacted Charter Amendment BBB.)