If LBREPORT.com didn't tell you,
who would?No one in LBREPORT.com's ownership, reporting or editorial decision-making has ties to development interests, advocacy groups or other special interests; or is seeking or receiving benefits of City development-related decisions; or holds a City Hall appointive position; or has contributed sums to political campaigns for Long Beach incumbents or challengers. LBREPORT.com isn't part of an out of town corporate cluster and no one its ownership, editorial or publishing decisionmaking has been part of the governing board of any City government body or other entity on whose policies we report. LBREPORT.com is reader and advertiser supported. Support independent news in LB similar to the way people support NPR and PBS stations. We're not so it's not tax deductible but $49.95 (less than an annual dollar a week) helps keep us online. (December 24, 2020, 12:25 p.m.) -- While Long Beach Mayor Robert Garcia cited a life threatening lack of regional hospital capacity due to a COVID-19 case surge, the City-owned Long Beach Community Hospital -- leased to a for-profit entity (Molina, Wu, Network LLC) remained closed, lacking CA Dept. of Public Health approval to reopen, being used instead as filming venue.

Photos below, taken by LBREPORT.com on December 23, show a major filming set up, mainly concealed along Termino Ave. but visible from a dead-end street (Wilton Place.) behind the hospital. 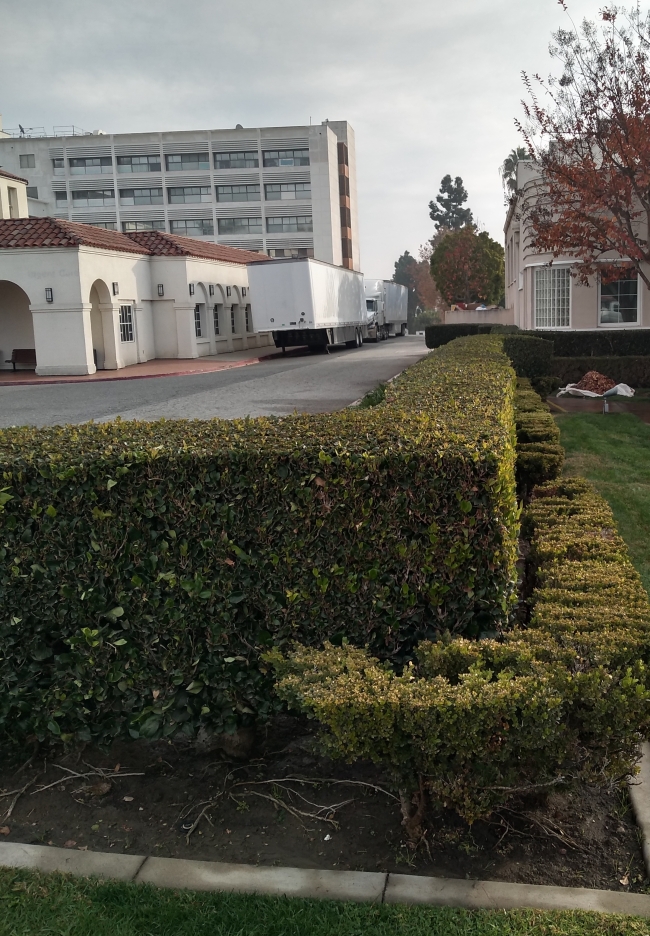 On Dec. 23, most of the filming equipment was concealed from Termino Ave. but were visible from an adjacent small dead-end street 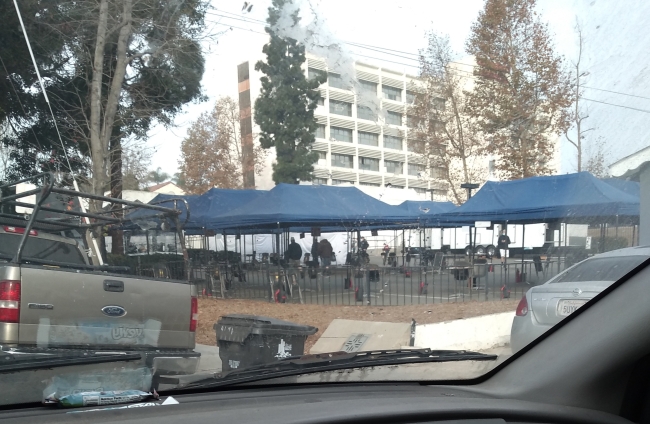 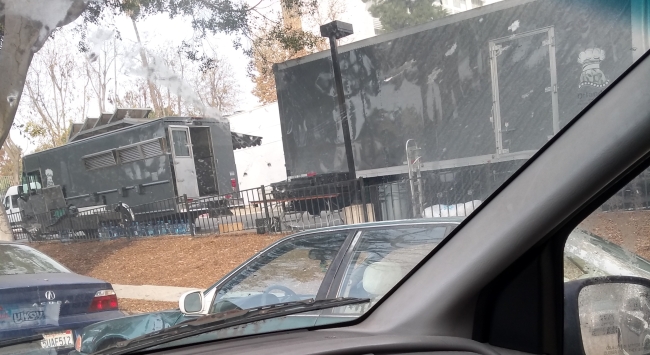 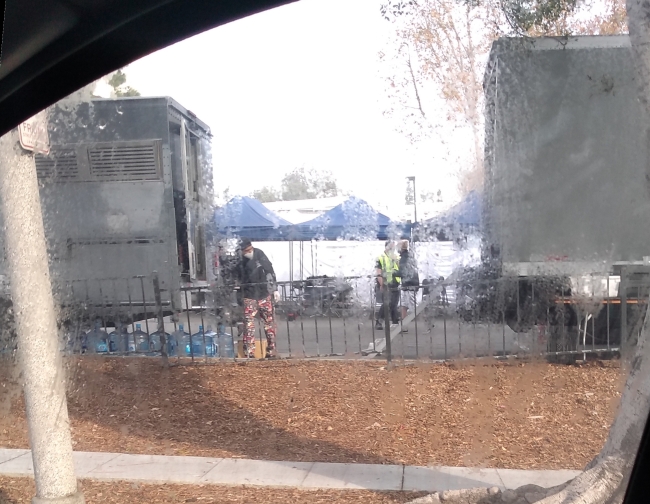 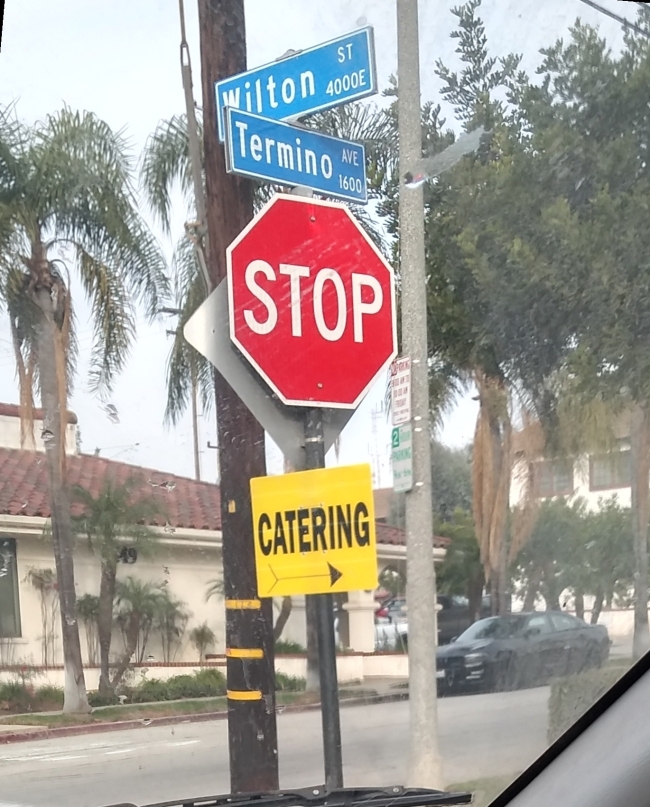 So were the elevator repairs performed? Responding to an inquiry from LBREPORT.com, Brandon Dowling, Communications Director for Pacific6 Enterprises, said in a Dec 23 evening email: "The $250,000 in elevator repairs was paid by the City of Long Beach and invoiced to the City of Long Beach. No money was ever 'given’ to MWN and we were never invoiced for the services." [LBREPORT.com doesn't have dates and other details yet but will follow-up with city staff on Dec. 28 and report additional information as newsworthy..]

On July 17, 2020, the City's Director of Economic Development, John Keisler, told LBREPORT.com via email that, quote, "the anticipated surge in hospital visits related to COVID-19 did not materialize, and the California Department of Public Health (CDPH) no longer required the use of Community Hospital for patient transfers."

However officials say the current (and worsening) COVID-19 surge has now left regional hospital capacity at a level nearing zero percent...while Community Hospital remains closed without explanation by City or MWN officials of exactly what issue(s) remain unresolved, by whom and why.

On December 23, city management notified media outlets including LBREPORT.com that Mayor Garcia and Director of Health and Human Services Kelly Colopy would provide updated information on a variety of coronavirus-related issues. It stated: "Please note that only one question per reporter will be allowed at today’s press briefing. [emphasis in orihinsl] Follow-up questions may be addressed via email."

Reporters were told they could ask questions in advance by email [reminiscent of the former Soviet era when officials demanded questions in writing allowing someone else to feed reporters a polished answer) or a live question requiring an RSVP email. LBREPORT.com complied with the RSVP request and noted that we sought to participate via telephone. Roughly two hours later, a city staffer contacted us, first contending that telephone questions weren't possible using Web-X (untrue), then simply reciting in mechanical fashion that city staff (who?) had decided not to allow telephone questions.

Follow-up efforts by LBREPORT.com to arrange a short telephone phoner with Mayor Garcia were unproductive, his Chief of Staff, Diana Tang, not responding to voice mail and email requests by us.

City management also stymied LBREPORT.com's request for information about the specific filming permit (such as the date of its application and the date of its approval) from its office of Special Events and Filming. On Dec. 23, LBREPORT.com phoned at midmorning seeking this information and was informed an individual handling filming matters would call us, which never happened. When LBREPORT.com pursued the matter at late afternoon, another individual in the office said no one was available to answer our questions.

The filming at the Community Hospital site wasn't a secret. Councilman Daryl Supernaw cited it in his December 18 weekly newsletter...without mentioning the $250,000 taxpayer cost that his April 14 motion had authorized or the COVID-19 lack of available hospital facilities. "December 21st | 7 am - 10 pm | 1720 Termino Ave.: Filming will take place at 1720 Termino Ave. Filming will consist of interior dialogue on ground floor and 3rd floor. Interior dialogue in hallway with talent watching Veronica talk to doctor, in a hospital room, in the maternity ward waiting room and psych ward hallway. December 23rd...Filming will consist of interior dialogue/walk and talk on 2nd & 3rd floors and walk and talk down a hallway."

Pacific6's Business Journal reporter asked Mayor Garcia if all the state requirements to reopen Community Hospital have been met and if not what still needs to be completed and what is the City doing to pressure the state to open up the facility immediately? [The reporter didn't seek names or other specifics, which effectively let Garcia respond as other officials have done for months: refer to what they're "told" or they "understand" (with no details from whom or from what source(s)) and blame the outcome to "the state" (again no names or specifics.) In part of his answer, Mayor Garcia cites a "final check list" of items, but what items are they? Does he know? And if not how does he know they're "minor"? Who's his source for this, by name? To hear Mayor Garcia's response, click here.