Special Report/ Detailed Coverage
Five Years Ago Today: Explosion Nearly Triggered Mass Casualty Release of MHF At Torrance (ToRC) Refinery; Wilmington Valero Refinery Bordering LB Is Only Other CA Refinery That Uses It, Here's What Has And Hasn't Happened Since Then If LBREPORT.com didn't tell you,
who would?No one in LBREPORT.com's ownership, reporting or editorial decision-making has ties to development interests, advocacy groups or other special interests; or is seeking or receiving benefits of City development-related decisions; or holds a City Hall appointive position; or has contributed sums to political campaigns for Long Beach incumbents or challengers. LBREPORT.com isn't part of an out of town corporate cluster and no one its ownership, editorial or publishing decisionmaking has been part of the governing board of any City government body or other entity on whose policies we report. LBREPORT.com is reader and advertiser supported. Support independent news in LB similar to the way people support NPR and PBS stations. We're not so it's not tax deductible but $49.95 (less than an annual dollar a week) helps keep us online. LBREPORT.com, an independent news outlet now in our 20th year, has reported this issue in detail. in previous coverage here, here, here, here, here and here. (February 18, 2020, 1:55 p.m.) -- Five years ago this morning (Feb. 18), an explosion at the Torrance (then Exxon-Mobil, now ToRC) refinery launched an 80,000 pound piece of metal that landed a few feet from a tank containing thousands of pounds of Modified Hydrofluoric Acid (MHF.) The result could have been a mass casualty event.

The only other CA refinery to use MHF is the Valero Wilmington refinery (owned by Ultramar) at 2402 E. Anaheim St. in Wilmington. Valero's refinery, next to Long Beach, is within sight of LB's Port and downtown and not far from a number of LB neighborhoods. MHF is transported to the two refineries in trucks traveling area freeways. .

MHF consists of roughly 93-94% Hydrofluoric acid (HF), a chemical so corrosive that if accidentally released, it can cause death or permanent health injuries. Scientists say that on release, HF forms an expanding ground-hugging cloud that doesn't dissipate upward; it travels over distances in whatever directions the prevailing wind sends it, dissipating gradually over distance. 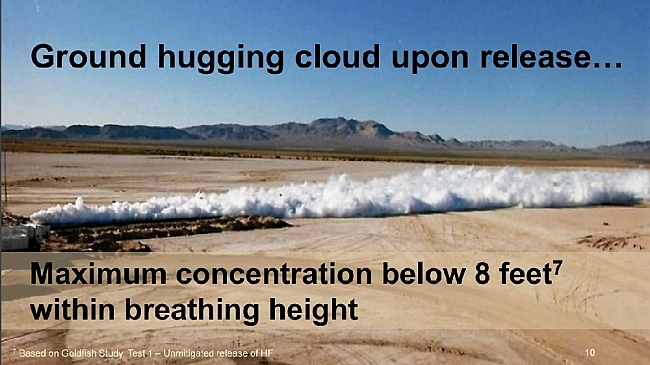 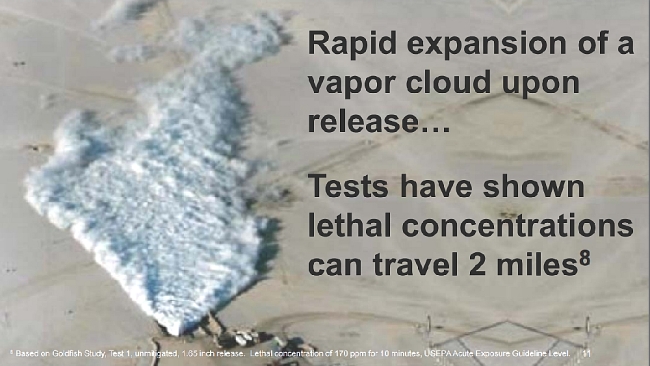 HF has the ability to kill or inflict long-term, possibly permanent injuries that go beyond burning/damaging skin and eyes; HF is absorbed into the body, meaning it can damage bones and internal organs. (Factors include amount re leased, concentration, distance and exposure duration.)

At a Feb. 1, 2019 meeting of AQMD's governing board, AQMD staff delivered a PPT presentation that provided an overview of the issues. Some of its salient slides are below. 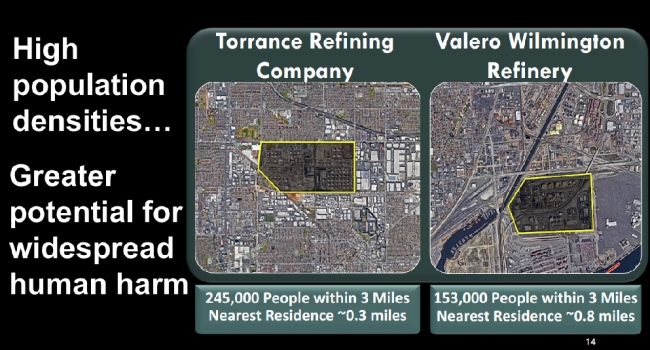 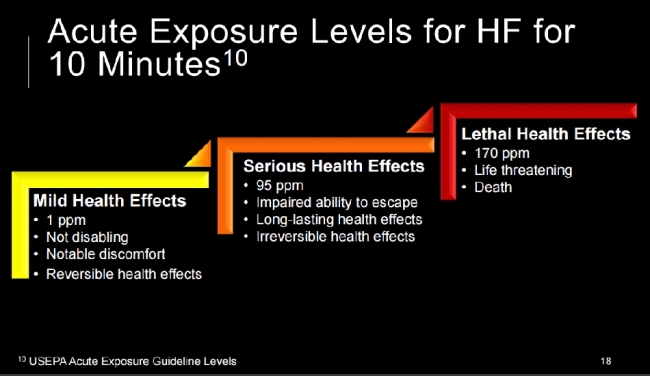 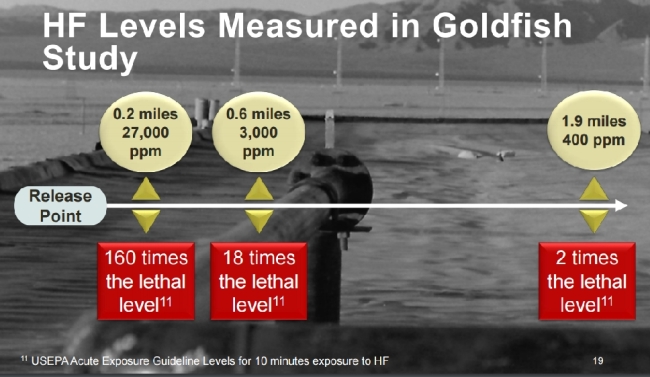 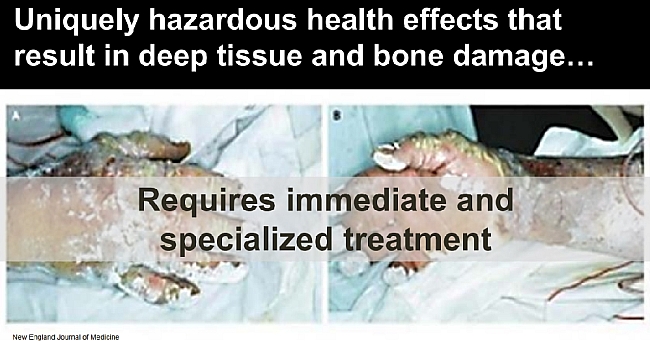 AQMD staff included a video clip from 1986 tests conducted by scientists to document and measure an HF release (before MHF was invented.) The tests showed that a golf-ball size hole (1.65") released 1,000 gallons of HF within 2 minutes. Once released and produced an HF ground hugging cloud that didn't disperse upward but rapidly expanded at breathing height (below 8 feet.) It traveled at the recorded wind speed of 18 feet per second, and under those conditions, in less than 10 minutes the corrosive toxic cloud traveled up to two miles. Within that distance, scientists measured HF at roughly double lethal levels.

AQMD acknowledged that this was an "unmitigated" release and the two refineries have certain "mitigation measures" on site, but noted that those systems, like others, can fail (as a different system did that caused the 2015 Torrance explosion and "near miss") and such failures can cascade in natural disasters (earthquakes) or with deliberate acts.

A video clip from the 1986 test shows the released HF forming the rapidly spreading, ground hugging traveling cloud. The video clip is included in on-demand VIDEO of AQMD staff's full Feb. 1 presentation, followed by public testimony, AQMD board discussion and voted action) which can be viewed here (Video of the 1986 HF test starts at 1:43:40.)

AQMD staff indicated that an MHF release would strain the ability of nearby hospitals and medical personnel to handle large numbers of patients who would require specialized treatment for MHF injuries.

AQMD staff have said it believes it's possible to convert the two refineries to use a less dangerous chemical -- sulfuric acid. In 2017, a firm hired by the ToRC refinery estimated conversion would cost $600 million plus $300 million for post-processing equipment. AQMD staff considers those figures high and contends (with caveats on the need to study the feasibility of reusing some current equipment) that the cost would be roughly $300 million for a converted alkylation facility, not $600 million. AQMD staff indicated the Valero Wilmington refinery didn't offer a conversion cost estimate but has indicated it would face space constraints.

A number of area elected officials have urged AQMD to phase-out/ban use of MHF, calling its continued use too risky in the densely populated area. They include the L.A. County Board of Supervisors, Congressmembers Ted Lieu, Nanette Barragan and Maxine Waters, the office of CA Attorney

The two refineries opposed a mandatory phase out, saying their use of MHF is safe and no other refineries had successfully converted from MHF to the safer chemical. Politically active unions (including those representing the refinery workers) and business interests (including the LB Area Chamber of Commerce) supported the refineries.

Hours before a June 2019 AQMD hearing, LB Mayor Robert Garcia (who doesn't set City policy) sent a letter urging a phase-out ban of MHF but didn't appear personally at the hearing and has never testified publicly at any AQMD hearing on the matter. LH's policy-setting City Council didn't hold any agendized proceedings to discuss or set City of LB policy on the issue.

On September 6, 2019, over the dissent of L,A. County Supervisor Janice Hahn, AQMD's governing board voted 8=3 to allow the continued use of MHF. It accepted an offer by the refineries to negotiate a "Memorandum of Understanding" (contract) with AQMD for what the refineries called additional safety measures and additional "mitigation" (based on a scenario envisioning release from a golf-ball size hole.) LBREPORT.com detailed coverage here.

No Long Beach elected officials (Mayor Garcia or Councilmembers) or LB city management or city staff testified at the decisionmaking Sept. 6, 2019 AQMD hearing (or in any of AQMD's multiple preceding hearings on the issue.)

In response to a Public Records Act request by LBREPORT.com, L.A. County has declined to release records that would show communications, if any, between Supervisor Hahn and Mayor Garcia's office on the matter.

TRAA says the MOU won't protect communities from a major HF release. In a Feb. 18, 2019 letter to Governor Gavin Newsom, calls on Attorney General Xavier Becerra's office to investigate (based on what it calls newly available evidence) the legal proceses by which the two refineries have been allowed to continue using MHF. .

To our knowledge, LBREPORT.com is the only LB news outlet to have covered the MHF issue in detail (links below) which has been covered by other L.A. and southbay news outlets.

A number of Long Beach Councilmembers (who set city policy) plus LB's Mayor (who doesn't set policy but frequently speaks to it) have received contributions from Valero and politically active organized labor supportive of the refineries' stance on the MHF issue: The contributions below are from "Valero, San Antonio, TX" unless otherwise indicated.