News
By The Numbers: In Jan 2021, Per Capita 4 Long Beach Council Districts Equaled, 3 Exceeded Chicago Person-Hit Shootings If LBREPORT.com didn't tell you,
who would?No one in LBREPORT.com's ownership, reporting or editorial decision-making has ties to development interests, advocacy groups or other special interests; or is seeking or receiving benefits of City development-related decisions; or holds a City Hall appointive position; or has contributed sums to political campaigns for Long Beach incumbents or challengers. LBREPORT.com isn't part of an out of town corporate cluster and no one its ownership, editorial or publishing decisionmaking has been part of the governing board of any City government body or other entity on whose policies we report. LBREPORT.com is reader and advertiser supported. Support independent news in LB similar to the way people support NPR and PBS stations. We're not so it's not tax deductible but $49.95 (less than an annual dollar a week) helps keep us online. (February 1, 2021, 12:25 p.m.) -- In January 2021, by population per capita, the area covered by four Long Beach mainly working class City Council districts -- CD 1 (Zendejas), CD 6 (Saro), CD 8 (Austin) + CD 9 (Richardsoj) had the same level of person-hit shootings as Chicago citywide. The area covered by three of them -- CD 6 (Saro), CD 8 (Austin) + CD 9 (Richardson -- had a level of person hit shootings exceeding Chicago.

In other words, if Vice Mayor Rex Richardson, a speculated candidate for LB Mayor if incumbent Garcia exits for a speculated Biden administration position, were Mayor of a city encompassing his 9th Council district plus CDs 6 and 8, it would have a per capita level of hit shootings in January exceeding that of Chicago citywide.

Based on the most recent map presented to LB's redistricting committee, the four Council districts above have the following individual populations:

We applied these numbers to the following record, compiled by us from daily LBPD checks. (As previously reported by LBREPORT.com, the City of LB doesn't list shootings as part of its crime stats. LBREPORT.com coverage here.)

Applying the per capita (population) factors above:

As a CD 6 candidate, Dr. Saro said she opposes restoring LBPD's field anti-gang and other officers and advocated using those funds for other community programs,. in November 2020, candidate Saro unseated long-time incumbent Councilman (2018-20 Vice Mayor) Dee Andrews who during his terms of office also didn't take action to restore the field anti-gang unit. CD's 1 and 6 have historically led other Council districts in shootings, the majority of which LBPD has indicated have gang ties.

On the Feb. 2, 2021 City Council agenda, Mayor Garcia proposes making Councilwoman Saro chair of the Council's "Public Safety Committee," a position in which she can control the Committee's agenda items. If approved by the Council on Feb. 2, Saro would replace Councilwoman Suzie Price as chair. (For roughly six years, Price declined to use her Committee chair position to advocate restoring the field anti gang unit or other portions of the roughly 180+ previously defunded officers for taxpayers.)

LBREPORT.com has been conservative in our calculation; we haven't included multiple other shootings -- with casings-found/building/vehicles struck shootings but missed hitting people -- because we don't have a similar metric for Chicago. 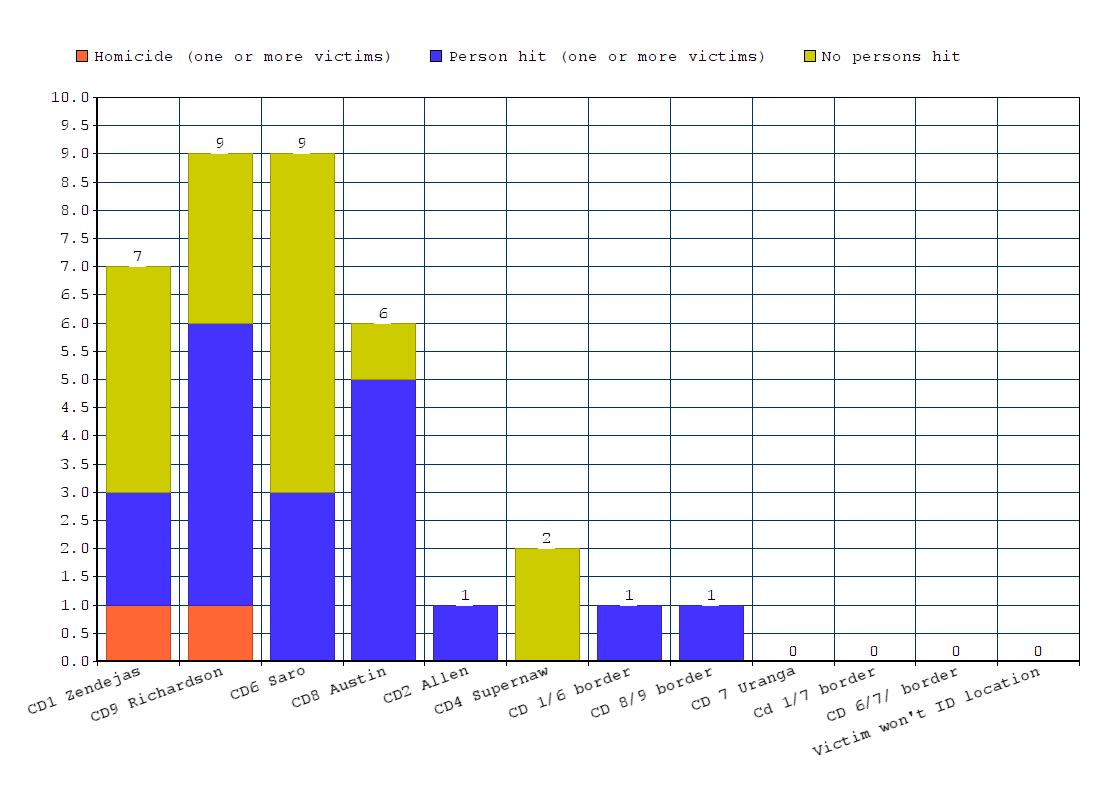