-->
News / Perspective
While Long Beach City Hall Bemoans Budget Deficit (Spending Exceeding Revenue), Blames COVID-19 And Risks Spending Part Of City's Emergency Reserves, Neighboring Lakewood (Also Facing COVID-19) Shows Budget SURPLUS If LBREPORT.com didn't tell you,
who would?No one in LBREPORT.com's ownership, reporting or editorial decision-making has ties to development interests, advocacy groups or other special interests; or is seeking or receiving benefits of City development-related decisions; or holds a City Hall appointive position; or has contributed sums to political campaigns for Long Beach incumbents or challengers. LBREPORT.com isn't part of an out of town corporate cluster and no one its ownership, editorial or publishing decisionmaking has been part of the governing board of any City government body or other entity on whose policies we report. LBREPORT.com is reader and advertiser supported. Support independent news in LB similar to the way people support NPR and PBS stations. We're not so it's not tax deductible but $49.95 (less than an annual dollar a week) helps keep us online. (February 14, 2012, 9:40 p.m.) -- While Long Beach city management prepares to tell the City Council on Feb, 16 that the City faces a near $20 million "deficit" (spending exceeding revenue) for which it proposes to draw down part of the City's Emergency Reserves, the neighboring City of Lakewood's city management has informed its City Council that despite COVID, their City has a budget surplus...and it's 45% larger than initially anticipated..

So what explains the difference?

[Scroll down for further. .

One of the more notorious examples was the 2002 pension spike approved under then-Mayor Beverly O'Neill, an action that continues to harm LB taxpayers to this day. With O'Neill presiding, the pension spike was agendized for two enactment votes: one on the final day of an outgoing Council and the second on the first day if an incoming one. Amid farewells and inaugurations, the Council votes were unanimous barely noted, although reported by LBREPORT.com at the time. Then-incoming Councilman Val Lerch has since repeatedly apologized for his first-day Council vote; O'Neill (who was among city employees benefiting from the pension spike) has to our knowledge not apologized for the action.

When the 2008 contracts reached the Council for approval, then-Councilwoman Rae Gabelich famously angered Mayor Foster by turning to face City Manager Pat West and asking "How are we going to pay for this?" (His answer didn't satisfy Ms, Gabelich who was the only Council incumbent to vote against both 2008 contracts.)

When the economic slowdown arrived in fall 2008, the Foster-applauded contracts became unsustainable and Foster responded by seeking and receiving contract do-overs that now include some long-term pension reforms. However the immediate taxpayer damage was already done and Foster (and a Council that by spring 2009 included Councilman Robert Garcia) began the largest reduction in police officers in the more than 100 year history of the City of Long Beach, Between 2009-2015, the Council erased 208 budgeted positions (including LB's field anti-gang unit.) Under Mayor Garcia (took office mid-2014) 22 officer positions were restored after LB voters approved the 2016 Measure A sales tax increase, but those positions have since been erased by a Sept. 2020 defunding of 48 officers (Council vote 9-0) following the Minneapolis PD killing of George Floyd.

Apart from union influences, Long Beach Councilmembers have independently enabled taxpayer-unfriendly spending items whose costs are among those now reflected in LB city management's Feb 16, 2021 "deficit" memo. Can you identify the controversial spending item in this budget-speak memo text

...Other sources of funds totaled $27.52 million in FY 20. The majority of these other sources are comprised of the release of reserves set aside in FY 19 to fund City Council-approved expenditures that were anticipated to occur in FY 20, such as the FY 19 encumbrances to be paid in FY 20, support for a Police Recruit Academy, City Manager Strategic Initiatives for FY 20, and release of $8.74 million in Measure A surplus from FY 19 for use in FY 20.

How'd that happen? On Feb. 18, 2020, Councilmembers (including Mungo) signaled that they didn't object to allocating $1.5 million for the artificial turf field as part of $4.3 million in Measure A FY19 "surplus" for various items. "Measure A and the promises of Measure A have consistently year after year been fulfilled. The promises that this dais, this board, made were for infrastructure and public safety. And maintaining our parks and libraries are [sic] as important as our streets," Mungo stated at the time.

But internal city records, obtained by LBREPORT.com under the CA Public Record Act, show that by early 2020 city staff realized the $1.5 million sum was as much as $900,000 short, consumed by installing artificial turf fields at Admiral Kidd and Seaside Parks

In a Feb. 11, 2020 email, then-acting City Manager Tom Modica told subordinate staff: "This project goes back several years -- it was originally awarded funding, then that funding was used to fund the other artificial turf fields as they were project ready, and now are back to finding funding to honor that original commitment and complete the project..." Accolrdingly, Mr. Modica added $850,000 to the El Dorado Park field's FY21 budgeted cost, bringing it to $2.35 million.

So how did it balloon from $2.35 million to a total project cost of $3.11 million despite COVID=19 budget impacts? Councilwoman Mungo initially tried to deny it, first contending (in materials disseminated by her Council office) that it was a "typo," then fogging the figure by claiming during the Council's final Dec. 8-9 project agenda item that the $3.11 million sum no longer applied because bids received were lower than expected. 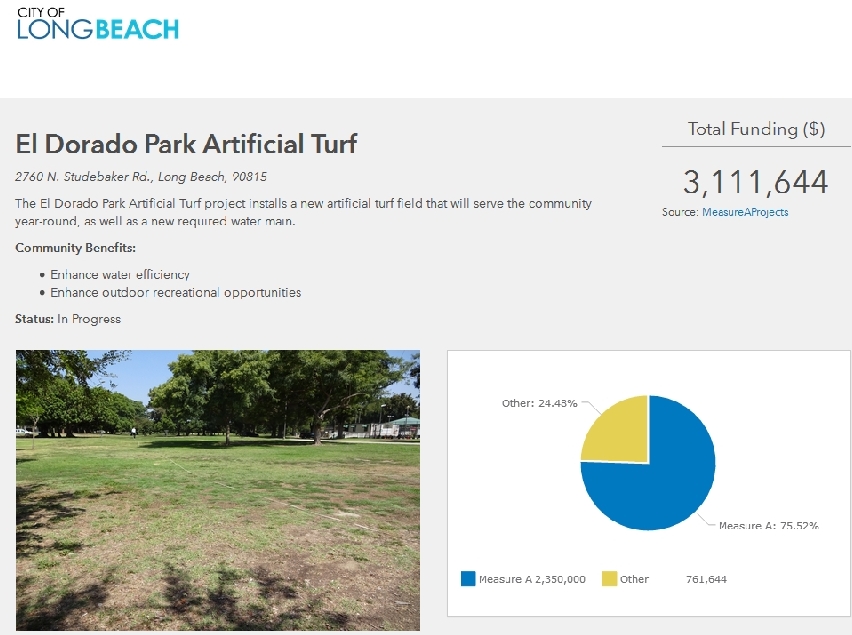