-->
News
In CD1 Neighborhood (15th/Magnolia) With 5 Shootings Within 5 Block Radius Since Jan 1, Officers Respond When A Man Allegedly Brandishes A Gun, Refuses To Drop It, They Shoot Him, He Dies If LBREPORT.com didn't tell you,
who would?No one in LBREPORT.com's ownership, reporting or editorial decision-making has ties to development interests, advocacy groups or other special interests; or is seeking or receiving benefits of City development-related decisions; or holds a City Hall appointive position; or has contributed sums to political campaigns for Long Beach incumbents or challengers. LBREPORT.com isn't part of an out of town corporate cluster and no one its ownership, editorial or publishing decisionmaking has been part of the governing board of any City government body or other entity on whose policies we report. LBREPORT.com is reader and advertiser supported. Support independent news in LB similar to the way people support NPR and PBS stations. We're not so it's not tax deductible but $49.95 (less than an annual dollar a week) helps keep us online. (February 7, 2021, 9;15 a.m..) -- LBPD body cameras were activated. They presumnably xaptured what happened last night (Saturday Feb, 6.) That's when residents of the working class neighborhood about a mile north of LBPD's new Civic Center -- beset by five shootings since within a five block radius since January 1 (represented by CD1 Councilwoman Zendejas since Dec. 2019) -- called police to report a man with a gun.

LBPD says in a release officers responded to the area of 14th St./Magnolia Ave., observed a mam matching a detailed description of the suspect provided by calling parties allegedly still brandishing his firearm. [LBPD release text] Officers "gave multiple commands for the suspect to drop his firearm, the suspect refused, and an officer involved shooting occurred. Officers immediately rendered aid until the Long Beach Fire Department arrived on scene and determined the suspect deceased." No officers were injured.

"The preliminary investigation revealed the suspect was was walking in the area pointing a firearm at multiple passing vehicles and at least four different victims. A firearm was recovered at the scene." 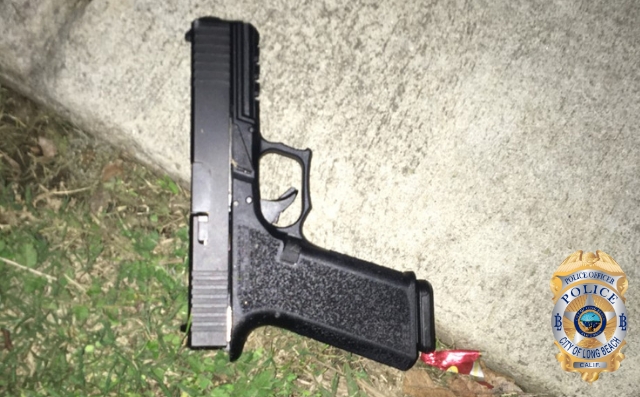 LBPD released photo of gun recovered at the scene

Identification of the suspect is being withheld until the next of kin is notified. [Update Feb. 7, 8::00 p.m.The LA County Coroner's office identifies the deceased as Anthony Steven Loia, 26]

The area has been represented since Dec. 2019 by Councilwoman Mary Zendeja, whose Council district led all others in shootings in the latter half of 2020 and 2021 to date (including one other homicide.) Zendejas was endorsed by Mayor Robert Garcia, immediate past incumbent (now state Senator) Lena Gonzalez and the leadership of the LB Police Offices Association (union). The three contributed $10,000 each, a sum exceeding campaign contribution limits to candidate campaigns, to support Zendejas by sending the sum to the LB Fireefighter Ass'n (union) which ran an independent campaign supporting her.

Zendejas was among the major supporter of a Sept, 2020 police defunding that erased 48 sworn officers (Council vote was 9-0.)

The net effect of the Sept. 2020 Council action wiped out 22 officers restored from 2017-2019 after LB voters enacted the Measure A "blank check" sales tax. That came on top of erasing 208 police officer positions (2009-2014), including LBPD field anti-gang unit, under Mayor Bob Foster in response to an economic slowdown (during which other area cities didn't reduce their police levels by 20%.) Then-CD1 Councilman/Vice Mayor Robert Garcia joined in those votes, making him the sole remaining LB elected who voted to erase the largest number of police officers for taxpyers in the more than 100 year history of the City of LB.

The net result has left LB with a thinner police level than Los Angeles, Santa Monica, or Signal Hill.

[Scoll down for further.]