Riverpark Coalition leader Kimberly Walters said a river-adjacent park at 3701 Pacific Place (just north of the 405 freeway and east of the 710 freeway) is a modest, reasonable and overdue action after years of publicly-announced and media-touted "plans" for river-adjacent open space. The Riverpark Coalition has deployed professionally printed lawn signs already very visible in the 8th district area. 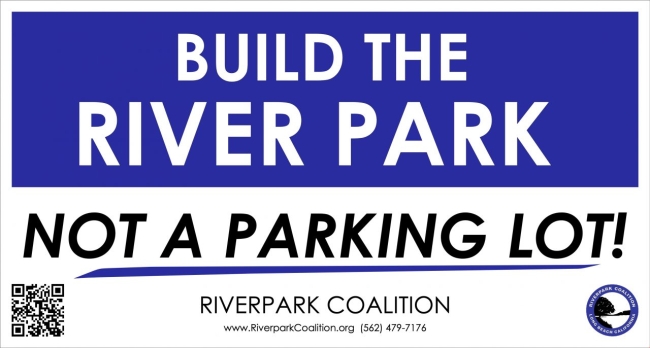 She said the group won't be deterred by temporary setbacks, noting that the Riverpark Coalition has already raised thousands of dollars for a legal defense fund and policy advocacy and is actively raising more..

To pursue their Riverpark plan, the group must first stop a Council majority in the coming weeks from approving a commercial/personal storage building and parking for RVs, trailers, campers, boats, trucks) at the site in LB's Los Cerritos neighborhood, which under prior ownership was a golf driving range.

As a political matter, incumbent Austin (a speculated future candidate for O'Donnell's Assembly seat if O'Donnell wins a future Mayoral race) risks angering voters already riled by his 2018 March 2018 LUE vote if he further enables neo-industrial or commercial use of the parcel. Among those supporting the Riverpark Coalition (and taking part in its Jan. 16 Zoom rally) is immediate past 8th dist. Councilwoman Rae Ganelich (2004-2012).

City staff has proposed that the Council approve a "mitigated negative declaration" (less than full environmental review) for the project. River park proponents urge a full Environmental Impact Report (EIR) for the historically polluted property. The issue is expected to reach the Council in the coming weeks.

LBREPORT.com has learned that the developer has hired long-time government affairs advocate (lobbyist) Mike Murchison, who with Mayor Robert Garcia and allied groups backed Austin's 2018 reelection, derailing by roughly 130 votes a runoff with Reform Ticket candidate Juan Ovalle. Former candidate Ovalle opposed the LUE change to neo-industrial. His brother, Carlos Ovalle (who independently heads the "People of Long Beach" advocacy group) spoke at the Jan 16 Zoom rally in support of the park proposal on behalf of Dr. Alex Norman, who was unable to attend due to recent surgery. .