First Person
LBREPORT.com Publisher Pearl Is Vax'd, NO Thanks to City of LB or "VaxLB"; We Explain How We Got It (65+) From LA County Dept. of Public Health If LBREPORT.com didn't tell you,
who would?No one in LBREPORT.com's ownership, reporting or editorial decision-making has ties to development interests, advocacy groups or other special interests; or is seeking or receiving benefits of City development-related decisions; or holds a City Hall appointive position; or has contributed sums to political campaigns for Long Beach incumbents or challengers. LBREPORT.com isn't part of an out of town corporate cluster and no one its ownership, editorial or publishing decisionmaking has been part of the governing board of any City government body or other entity on whose policies we report. LBREPORT.com is reader and advertiser supported. Support independent news in LB similar to the way people support NPR and PBS stations. We're not so it's not tax deductible but $49.95 (less than an annual dollar a week) helps keep us online. "...[I]t doesn't take much to see that the problems of three little people don't amount to a hill of beans in this crazy world..." In character: Humphrey Bogart to Ingrid Bergman in Casablanca (1942) 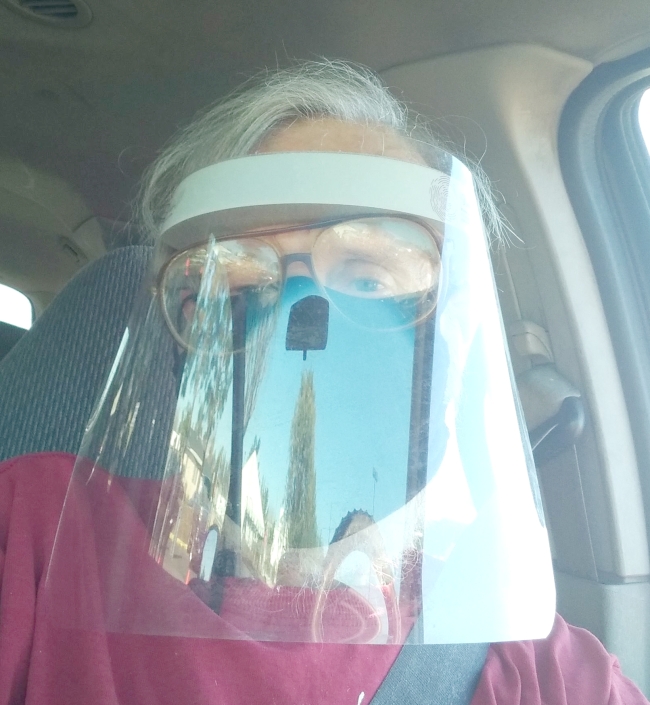 Yes, as the photo shows I wore a face shield ($18 for five via Amazon in October) in addition to a mask. No, I don't wear a face shield everywhere but as a reporter if I have to attend a mass event or other location with higher than everyday risks, I do so. This was a mass attended event and many people working the event also wore face shields.I wouldn't be vaccinated today were it not for a comment on Facebook by former LB Councilmam/former LBCC Trustee Jeff Kellogg On Jan 23, Mr. Kellogg commented on his

No, the system never did. Although city management and others echoed City Hall's narrative, many members of the public said they'd repeatedly tried and been stymied in getting vaccination appointments. Without seeing documents and numbers (requested by us and sought in pending Public Records Act requests) it's hard to know the exact results at this point.

But what the public described sounded like my experience. After registering with the city early in the process, I received a robo-digital email telling me I was on a waiting list and to keep waiting, I then heard nothing further for over a week while others (some but not all with City Hall ties or friends who had them) received appointments and vaccinations. My wife, age 65+, was likewise stymied by LB's system..

{Scroll down for further.]

In a Jan. 29 emailing (from "covid19vaccine@longbeach.gov") the City said as of Jan. 29 "more than 40,000 vaccine doses have been administered in Long Beach" and "this past week, more than 10,500 people were vaccinated in Long Beach." The email said the City will continue to "use VaxLB and employers in the eligible sectors to notify" residents "as appointments become available to receive their first vaccination " It added:

Long Beach residents 65 and older, emergency services personnel and healthcare workers in phase 1a will continue to be contacted through VaxLB as vaccine becomes available to receive their first vaccination through a partnership with MemorialCare and several other providers throughout the city. Grocery workers may be notified by their employers to be vaccinated through grocery store pharmacies. Education sector workers will be contacted through their employer when appointments are available and will be vaccinated through the Health Department, dependent upon supply. Some vaccine has been allocated directly to healthcare providers, and people also are encouraged to check with their healthcare provider for vaccine availability.