News
Miraculously, No Major Injuries After Four-Vehicle ELB Hit/Run . If LBREPORT.com didn't tell you,
who would?No one in LBREPORT.com's ownership, reporting or editorial decision-making has ties to development interests, advocacy groups or other special interests; or is seeking or receiving benefits of City development-related decisions; or holds a City Hall appointive position; or has contributed sums to political campaigns for Long Beach incumbents or challengers. LBREPORT.com isn't part of an out of town corporate cluster and no one its ownership, editorial or publishing decisionmaking has been part of the governing board of any City government body or other entity on whose policies we report. LBREPORT.com is reader and advertiser supported. Support independent news in LB similar to the way people support NPR and PBS stations. We're not so it's not tax deductible but $49.95 (less than an annual dollar a week) helps keep us online.
Long Beach COVID-19 Cases / Deaths
Total positives (red dots) and deaths (black dots)

(July 12, 2020) -- Despite a four-vehicle hit/run collision in which three vehicles sustained major damage (photos below) but no persons appear to have suffered major injuries in dusk-hour collisions along Woodruff Ave.from south of Conant St to nearly Carson St.

Photos captured at the scene by Ghazal Seino (shared with LBREPORT.com, thank you) show wreckage in the area near Heartwell Park just south of Carson St. 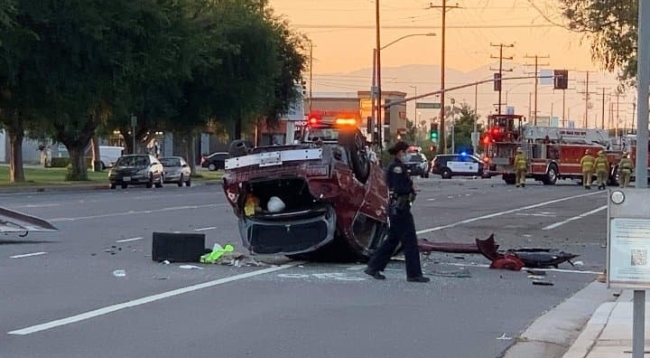 "The suspect vehicle fled prior to officers' arrival and is believed to have been a white Mercedes Benz coupe," Det. Arzola said (no susspect/driver info immediately available.)

LBFD responded but didn't transport anyone to hospitals. Incredibly, no major njuries were reported.