News
On July 14, Council Could Adopt These Zoning Changes Allowing These Homeless Facilities In These Commercial And Mutli-Unit Residential Areas . If LBREPORT.com didn't tell you,
who would?No one in LBREPORT.com's ownership, reporting or editorial decision-making has ties to development interests, advocacy groups or other special interests; or is seeking or receiving benefits of City development-related decisions; or holds a City Hall appointive position; or has contributed sums to political campaigns for Long Beach incumbents or challengers. LBREPORT.com isn't part of an out of town corporate cluster and no one its ownership, editorial or publishing decisionmaking has been part of the governing board of any City government body or other entity on whose policies we report. LBREPORT.com is reader and advertiser supported. Support independent news in LB similar to the way people support NPR and PBS stations. We're not so it's not tax deductible but $49.95 (less than an annual dollar a week) helps keep us online.
Long Beach COVID-19 Dashboard

(July 12, 2020, 5:10 a.m.) -- On July 14, the City Council could vote to expand the zoning code's definition of "Interim Housing" and make multiple zoning changes that would expand areas in which homeless-serving facilities could operate. These could affect neighborhoods with some types of commercial zones and neighborhoods with multi-unit residential zones.

On July 7, the Council gave initial voted approval to the changes and if it does so for a second time on July 14, they changes will become city zoning law. .

Although city staff notes that state law requires some of the changes, most of the LB details, including the types, extent and allowable locations are discretionary; a Council majority could tweak, amend, change or some of them..or accept them as proposed below.

Social service facility without food distribution would be allowed by-right in the CCN zone and with an AUP in the CNP and CNR zones districts.

Social service facility with food distribution could be allowed with a CUP (conditional use permit) in the CNR and CCN zones. ("These changes will increase the opportunity for services to be located closer to where persons experiencing housing insecurity are located. 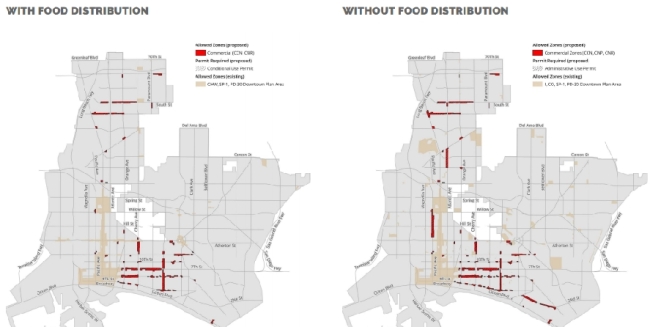 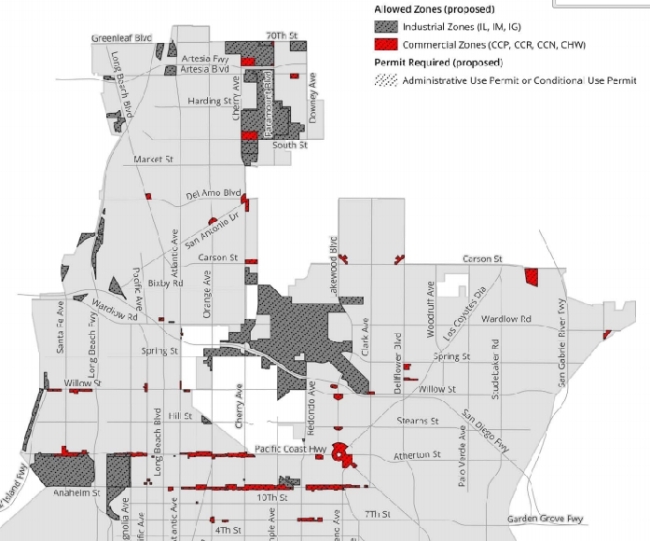 City staff says Safe Parking Sites locations will connect those living in vehicles to services and permanent housing, and will include confirmed case management and pre-screening of participants, plus on site security, lighting and sanitation facilities, established hours of operation and noise standards. They'd be allowed with an AUP (administrative use permit) in Commercial zones CNR, CCN and CHW and the General Industrial (IG) zone, and with a CUP (conditional use permit) in the Institutional (I) zone. They're currently allowed by-right as an accessory use to places of religious worship in all zoning districts and as a primary use in the IL and IM zoning districts.

City staff says it held a "focus group with external stakeholders" on Oct. 28, 2019, followed by two "open houses" on the proposal (one at WLB's Multi Service Center (Jan 28) and another at Central LB's Ain Library (Jan. 30.) Staff held a "study session" for LB's Planning Commission (Feb. 20, 2020) after which the Mayor-chosen/non-elected body voted on April 16, 2020 to advance the proposal to the City Council.

City staff says it met minimum legally required public notice requirements. LBREPORT.com spotted the item and reported on the proposed zoning changes before they came to the July 7 Council meeting.

A Council majority can amend, tweak or change city staff's proposed zoning changes or adopt as proposed by staff on July 14. On July 7, the Council voted without dissent to approve staff's desired changes as proposed; the Council's July 14 will be the enacting vote.

The Council faces some Sac'to constraints. In 2019 (without opposition by the City of LB) the state legislature enacted two bills that limit local control.

AB 2162 requires "by-right review of supportive housing on properties where multi-family and mixed uses are permitted, if the proposed housing meets specified criteria. It also requires local jurisdictions to "streamline" approval for certain qualifying projects by removing required California Environmental Quality Act (CEQA) analysis and removing the requirement for a discretionary use permit, such as a Conditional Use Permit (CUP)."

AB 101 now requires by-right "streamlined" review of shelters in non-residential zones that permit multifamily housing, if the shelter meets certain criteria. It also creates incentives, in the way of grants, for jurisdictions that follow State Housing Element Law and establishes penalties for jurisdictions that don't comply.