News / Perspective
Mayor Garcia Offered Excuses For City's Inability To Deter Neighborhood Disruptive Fireworks Scofflaws. Here's What Your Councilmember Could Direct City To Do That Some Other Cities Do...And LB Hasn't Done If LBREPORT.com didn't tell you,
who would?No one in LBREPORT.com's ownership, reporting or editorial decision-making has ties to development interests, advocacy groups or other special interests; or is seeking or receiving benefits of City development-related decisions; or holds a City Hall appointive position; or has contributed sums to political campaigns for Long Beach incumbents or challengers. LBREPORT.com isn't part of an out of town corporate cluster and no one its ownership, editorial or publishing decisionmaking has been part of the governing board of any City government body or other entity on whose policies we report. LBREPORT.com is reader and advertiser supported. Support independent news in LB similar to the way people support NPR and PBS stations. We're not so it's not tax deductible but $49.95 (less than an annual dollar a week) helps keep us online.
Long Beach COVID-19 Cases / Deaths
Total positives (red dots) and deaths (black dots)

On July 21, 2017, LBREPORT.com described how other cities use administrative citations -- civil notices, not misdemeanor criminal charges -- that can carry hefty fines but needn't involve sworn police officer involvement or criminal prosecution (which requires conviction "beyond a reasoable doubt." In contrast, an adminsitrativce citation can be issued by non-sworn city employees, doesn't require proof beyond a reasonable doubt to sustain and can still carry a hefty fine.

On June 19, 2018, LBPD/LBFD presented a pre-July 4th report that didn't mention using administrative citations. However Councilwoman Price separately agendized an item inviting a "Third District Residents' Fireworks Committee" to present the results of its independent nearly-year-long research which (ndependent of LBREPORT.com) recommended actions including administrative enforcement. Councilwoman Price thanked the volunteer Committee for its work and said: "The administrative citation option is something that my staff is researching now to bring back as a potential agenda item in the future."

In March 2019 with another July 4th period approaching, city staff sent the Mayor/Coucil a non-agendized memo citing reasons for not recommending use of administrative enforcement to deter and punish fireworks scofflaws. City staff's memo, which can be viewed in full here, reviews the use of administrative enforcement by other cities and also considers online reporting and remote surveillance. The memo estimates LB's daily cost to implement all of the methods would include $35,000 to deploy LBPD officers and LBFD arson investigators plus $40,000 to purchase two special law enforcement drones. It estimates long-term costs would include another Deputy City Attorney position ($210,000) plus a minimum of 300 hours of administrative code enforcement work ($19,500, to review video evidence and process administrative appeals, plus a hearing officer on appeals at $150 per case. The memo also notes that using city staff represented by employee unions would also require meet-and-confer proceedings under the Meyers-Milias Brown Act.

In pertinent part, city staff's memo states: "Given the significant immediate and long-term costs, legal concerns, potential lawsuits involving privacy issues, and the substantial administrative resources required, it is not recommended that the City implement and online reporting tool or a drone surveillance tool for fireworks enforcement. Implementing an extensive administrative citation program to enforce fireworks violations will require additional analysis to determine exact costs for additional resources and staff time...There are also significant concerns with the increased risk and danger to City staff when conducting enforcement of large crowds in areas of high activity during the Fourth of July holiday..." 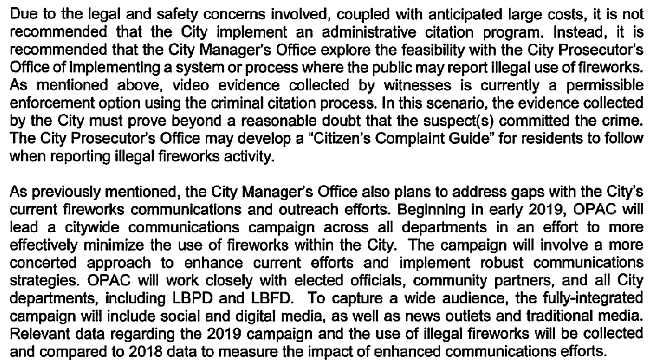 The City Council sets policy, not city management and not Mayor Garcia. Any City Councilmember(s) could have, and still can, agendize an item to deal with this chronic, continuing neighborhood impacting issue. (LB's current City Council prevents residents from agendizing items for Council action, a right LB residents previously had.)

The use of administrative citations to deter fireworks scofflaws is separate from whether Sacramento does or doesn't allow July 4 mass gatherings for fireworks displays..