If LBREPORT.com didn't tell you,
who would?No one in LBREPORT.com's ownership, reporting or editorial decision-making has ties to development interests, advocacy groups or other special interests; or is seeking or receiving benefits of City development-related decisions; or holds a City Hall appointive position; or has contributed sums to political campaigns for Long Beach incumbents or challengers. LBREPORT.com isn't part of an out of town corporate cluster and no one its ownership, editorial or publishing decisionmaking has been part of the governing board of any City government body or other entity on whose policies we report. LBREPORT.com is reader and advertiser supported. Support independent news in LB similar to the way people support NPR and PBS stations. We're not so it's not tax deductible but $49.95 (less than an annual dollar a week) helps keep us online. (March 21, 2020, updatd 9:15 p.m. from 8:30 p.m. initial) -- LBREPORT.com has learned that Community Hospital of Long Beach could now become a COVID-19 patient transfer facility after John Molina, a of Pacific6 (an entity partnering in the MWN LLC chosen by the City of LB in 2019 to re-open Community Hospital as a 20-30 bed acute care facility) contacted the office of Assemblyman Patrick O'Donnell (D, Long Beach-San Pedro) regarding Sacramento emergency funding to enable a larger 158 bed COVID-19 operation.

The facility was supposed to accommodate COVID-19 transfer patients starting today (March 21) but that didn't happen (see statement from spokesperson below.)

In a telephone conversation with LBREPORT.com in the 6 p.m. hour March 21, Assemblyman O'Donnell described in general terms fast breaking developments over a short period of time that facilitated state legislature-enabled taxpayer funding for the arrangement.

Assemblyman O'Donnell said he didn't speak with Mr. Molina personally who contacted his office on the matter. Assemblyman O'Donnell said he worked with other LB-area state legislators to facilitate use of the state funds as a benefit to his constituents in the LB area and praised the response, actions and outcome. [Our telephone conversation occurred before we learned Community Hospital didn't reopen March 21 as expected.)

To hear the conversation with Assemblyman O'Donnell, click here.

In a March 18 co-signed letter, state Senators Lena Gonzalez (D, LB-southeast LA County) and Tom Umberg (SE LB-west OC) and Assemblyman O'Donnell (LB) told Governor Newsom and CA's Dept. of Public Health Director that Community Hospital "is ready to immediately open the hospital to provide urgent care and serve those who need to be isolated and quarantined." Their letter told the Governor "in order to reopen the facility and ensure there is enough capital to pay employees and provide critical services, we strongly urge emergency state funding authorized by SB 89" to be allocated to Community Hospital.

Right now, we are working around the clock to finalize the arrival of patients from local hospitals and to ensure that we have the necessary staffing, equipment and medical supplies to guarantee their safety and care. We did not be accept patients today, however we expect to start accepting transfer patients in the coming days. We're working with the State, specifically CDPH, on the necessary licensures for the hospital and will keep you updated with any developments. This is a quickly moving situation so things are changing rapidly. More to come next week. [END UPDATE]

The additional COVID-19 capacity provided by Community Hospital is expected to relieve some of the pressure on other area hospitals straining to meet an expected exponential increase in seriously ill COVID-19 patients. A Pacific6 March 19 release said its 158 bed COVID-19 transfer facility will include 10 intensive care beds and 10 ventilators.

The re-opening of Community Hospital as a COVID-19 transfer facility differs from the LB city management-negotiated/City Council approved 2019 transaction with MWN...but Assemblyman O'Donnell voiced confidence that when the COVID-19 emergency eventually ends, the net result will segue into the acute care operation that the City and MWN had been pursuing for over a year.

In October 2019, the LB City Council (motion by Supernaw) voted to authorize city management to enter into an agreement with the for-profit MWN LLC that commits LB taxpayers to spend up to $25 million in annual sums of between $1 million to $2 million over up to 15 years for seismic upgrades to the City-owned site. It also requires the City to reimburse MWN for the LLC's costs incurred if MWN subsequently chooses not to continue to operate Community Hospital as an acute care facility. (LBREPORT.com coverage here.)

In social network dispatches, some LB officials who supported that transaction have now sought to blur the distinction between their Oct. 2019 voted action and Sacramento's March 2020 COVID-19 actions. The Council's Oct. 2019 action presumed the use of Measure A sales tax revenue, but in a March 3 election outcome that remains too close to call, the latest tally shows LB voters by a margin of 0.14% rejecting the Mayor/Council sought extension of the 2016 Measure A sales tax (slated by its terms to drop in half in 2023 and expire in 2027.)

Although city officials have been working for over a year to reopen Community Hospital as a 20-30 bed acute care facility, the COVID-19 overflow arrangement apparently developed very quickly.

On March 10, 2020, Pacific6 Enterprises (a partner in the MWN LLC) issued a release that didn't mention COVID-19. Instead, it noted that in late February 2020 a Sacramento agency approved a needed hospital lab license, said MWN was working to restore the facility's historic facade/exterior and was developing seismic plans for the hospital's original building that will "result in a future, state-of-the-art micro acute care hospital." The Pacific6 March 10 release said that "pending appeals of all state licensures, MWN "plans to start accepting patients later this year."

But by March 18, state Senators Lena Gonzalez (D, LB-southeast LA County) and Tom Umberg (SE LB-west OC) and Assemblyman Patrick O'Donnell (LB) co-signed a letter to Governor Newsom and CA's Dept. of Public Health Director indicating Community Hospital "is ready to immediately open the hospital to provide urgent care and serve those who need to be isolated and quarantined." The lawmakers told the Governor "in order to reopen the facility and ensure there is enough capital to pay employees and provide critical services, we strongly urge emergency state funding authorized by SB 89" to be allocated to Community Hospital. 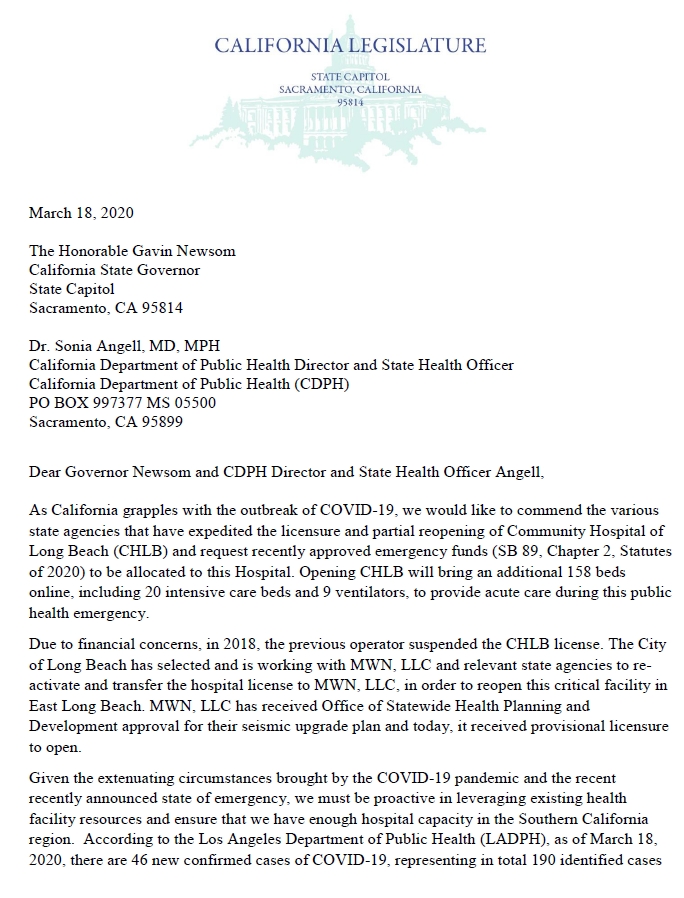 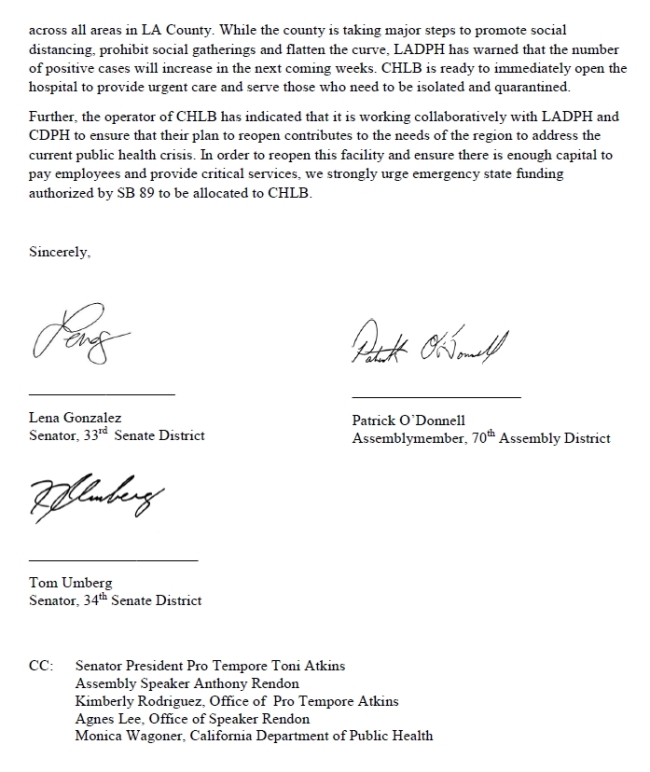 A day later on March 19, WNN issued a a release stating that Community Hospital would reopen "for the specific purpose of accepting transfer patients beginning this Saturday March 21." It quoted Mr. Molina as thanking the Governor, state officials and the City of Long Beach for what he called "decisive efforts in the swift reopening of Community Hospital." The release didn't explicitly acknowledge the state taxpayer funds that effectively enabled it.

On March 21, Governor Newsom cited Community Hospital in a release describing emergency funding to lease Seton Medical Center in Daly City (SF area) and St Vincent Medical Center in Los Angeles (the latter closed in January) for COVID-19 purposes. The Governor's release mentioned: "This builds on California's previous work, in partnership with local officials, to reopen Community Hospital in Long Beach for the specific purpose of accepting patients transferred from other hospitals in the area. The hospital will begin accepting transfer patients on Saturday and has a capacity of 158 beds."