-->
News
Three Council Incumbents (Zendejas, Price, Richardson) Form 2022 Re-Election Committees, Richardson Begins Raising Money If LBREPORT.com didn't tell you,
who would?No one in LBREPORT.com's ownership, reporting or editorial decision-making has ties to development interests, advocacy groups or other special interests; or is seeking or receiving benefits of City development-related decisions; or holds a City Hall appointive position; or has contributed sums to political campaigns for Long Beach incumbents or challengers. LBREPORT.com isn't part of an out of town corporate cluster and no one its ownership, editorial or publishing decisionmaking has been part of the governing board of any City government body or other entity on whose policies we report. LBREPORT.com is reader and advertiser supported. Support independent news in LB similar to the way people support NPR and PBS stations. We're not so it's not tax deductible but $49.95 (less than an annual dollar a week) helps keep us online. (March 13, 2021, 11:25 a.m.) -- Three of five Long Beach Council incumbents have filed early paperwork forming committee that can raise money for their re-election in 2022: Mary Zendejas (CD 1), Suzie Price (CD 3) and Rex Richardson (CD 9).

The FPPC paperwork (a "statement of organization" and "candidate intention statement") lets them raise funds but doesn't commit them to follow-through in seeking those offices...and in most cases they can switch sums raised to pursue other offices.

Richardson, chosen in mid-Dec. 2020 by the Council as its Vice Mayor on a 5-4 vote (LBREPORT.com coverage here), has already begun raising money. In a March 10 Zoomed campaign event, Richardson touted the presence of former 8th district Council candidate Tunua Thrash-Ntuk, who raised large sums but finished second to incumbent Al Austin in November 2020. 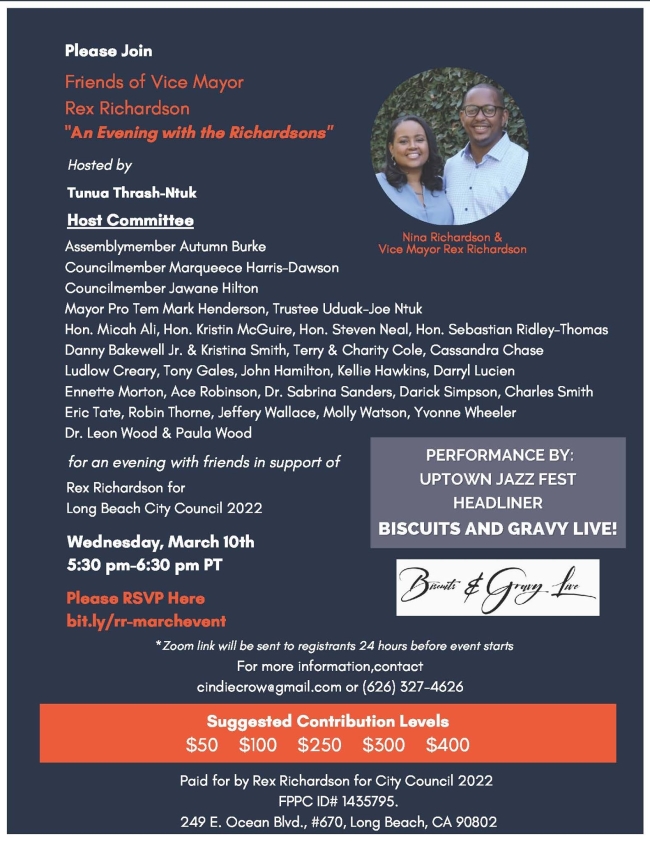 Richardson and Price are both effectively exploiting Charter Amendment BBB (that Council incumbents unanimously voted to put on the 2018 ballot and LB's Reform Coalition opposed) in which LB voters (after a six figure campaign by Mayor-run committee) voted to let two term incumbents avoid a write-in when seeking third terms. As of March 13 there's no reelection paperwork publicly on file (with plenty of time to spare) for incumbents Stacy Mungo (CD 5) and Roberto Uranga (CD 7)

Zendejas, elected in a no-runoff Nov. 2019 special election to fill the CD 1 Council seat vacated by then-CD 1 incumbent (now state Senator) Lena Gonzalez will be seeking her first full four year term in 2022. She was elected with the help of three $10,000 contributions from Garcia, Gonzalez and the LB police officers union PAC, that skirted LB contribution limits to candidate-run campaigns by giving the $30,000 to the LB Firefighters Ass'n PAC which then ran its own "independent" campaign supporting Zendejas.

There's no 2022 paperwork publicly on file at this point for citywide electeds Mayor, Auditor, City Attorney and City Prosecutor.