-->
News
Grassroots CARP Offers To Drop Legal Challenge If City (Council Majority Vote) Commits To Build At Least Two Pools In Historically Disadvantaged LB Neighborhoods If LBREPORT.com didn't tell you,
who would?No one in LBREPORT.com's ownership, reporting or editorial decision-making has ties to development interests, advocacy groups or other special interests; or is seeking or receiving benefits of City development-related decisions; or holds a City Hall appointive position; or has contributed sums to political campaigns for Long Beach incumbents or challengers. LBREPORT.com isn't part of an out of town corporate cluster and no one its ownership, editorial or publishing decisionmaking has been part of the governing board of any City government body or other entity on whose policies we report. LBREPORT.com is reader and advertiser supported. Support independent news in LB similar to the way people support NPR and PBS stations. We're not so it's not tax deductible but $49.95 (less than an annual dollar a week) helps keep us online.

(March 5, 2012, 8:40 p.m.) -- Citizens About Responsible Planning (CARP), the grassroots group that has pursued an ongoing legal challenge to City Hall's desire to build a Belmont Beach Aquatic Center (BBAC) adjacent to the sand in affluent SE Long Beach, has offered to drop its lawsuit if the City Council agrees to build at least two pools serving historically disserved parts of the City.

One way or another, that Council vote is coming.. That's because a Feb 11, 2021 Coastal Commission vote withheld final approval of the BBAC unless the City commits to equity/environmental justice actions -- and brings them back for Coastal Commissioners' review and approval -- to try to address the proposed location of the BBAC in affluent SE LB several miles distant from working class and historically disadvantaged LB neighborhoods. . 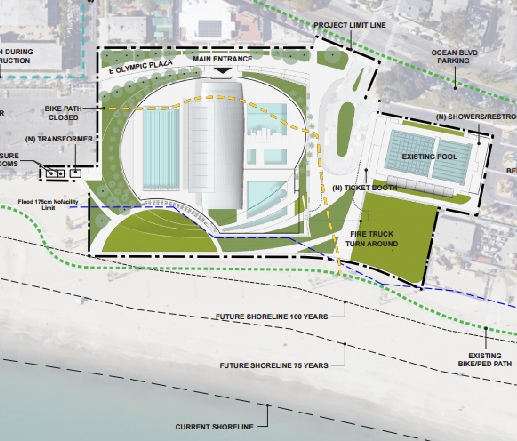 "Many handicapped and disabled persons, both young and old need to travel 10 miles or more across Long Beach to the proposed BBAC site" said Fran Itkoff, leader of the Long Beach/Lakewood MS (Multiple Sclerosis) Support Group said, "It is important for our MS family to have more handicap accessible pool facilities available in addition to locations like the [WLB] Silverado Pool we have used for years”." p>

Building the project along the coast (site of the seismically challenged Belmont Plaza pool built in 1968 before Coastal Act) has let City Hall avoid tapping General Fund money...thus far. City management's current cost estimate (about $ 82-$85 million) is over two years old and management has acknowledged that using $60 million in Tidelands funds still leaves project short of needed funding by at least $20-$25 million. That sum, and possibly more, would have to come from sources currently unidentified in an amount currently unknown when management brings it to the Council for a recorded Council vote.

A lawyer for a City Hall hired law firm called CARP's offer to settle the case by agreeing to build two pools in historically disadvantaged neighborhoods a "non-starter" but he doesn't decide; a Council majority will.