(Nov. 10, 2021, 6:15 a.m.) -- In changes that could affect Long Beach elections for the next ten years, a last-minute map (below) advocated by political interests -- including one-term former CD 2 (Council-censured) Councilwoman Jeannine Pearce (in her Nov. 9 emailed words working "with the creators of the Equity Map, Centro Cha, the Cambodian Community, and the Black Ministers Alliance") -- would cut an additional populated area out of CD 5, remove Eastside Voice founder/leader Corliss Lee from CD5 (along with previously removed incumbent Stacy Mungo and challengers Gerrie Schiske and Michelle Dobson.)

It would give the newly proposed poulated area (NE quadrant of Plaza area north to Wardlow Rd.) to CD 4 Supernaw (safe from re-election challenge until 2024) and attaches a large area west of the Airport (Cal Hts and a divided Bixby Knolls) to CD 5. 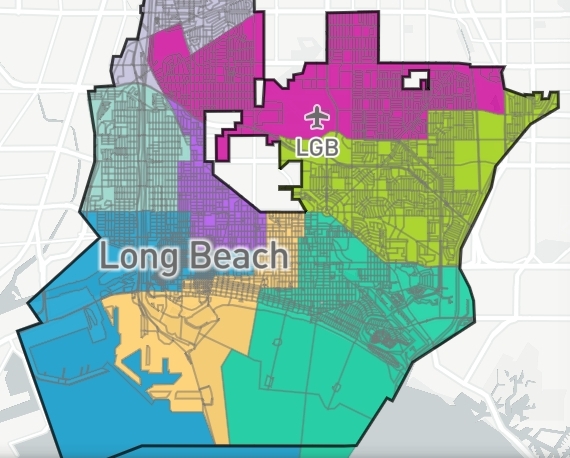 The last minute map would also give the downtown Entertainment District to CD 2's Allen (producing two downtown area representatives and two Port representatives favored by downtown interests.) CD 1's Zendejas, whose current district is a mainly working class area with a disproportionate number of shootings, would include the westen part of the Port, a source of potential lucrative campaign contributions as she seeks re-election in 2022.

The last minute map calls itself Map 2.2.and proposes to amend "Map 2" (called Map1b in Nov. 3 Commission proceedings) which is the only map currently advanced for discussion at tonight's (Nov. 10) Redistricting Commission meeting, although the Commission can legally consider and support amendments or other maps.

Pearce's Nov. 9 email says the last minute map has "over 50 names" in support and "protects Black Neighborhoods, keeps the Cambodian Community Together, and solidifies a Latino Cultural district that includes a library and the Museum of Latin America Art."

Tonia Reyes Uranga (former CD 7 Councilwoman and spouse of CD 7 incumbent Roberto Uranga) has told LBREPORT.com that she would support the last minute map changes to Map 2 which she supported at the Nov. 3 Redistricting Commission meeting. [Map 2 and the last minute map would effectively solidify previously gerrymandered Wrigley and solidify the political base of incumbent Roberto Uranga, seeking reelection in 2022.]

At tonight's (Nov. 10) meeting, the Redisricting Commission could adopt Map 2, or adopt Map 2 with the last minute proposed map changes, or vote again on Map 1, or choose other maps or make other changes. It has set a deadline for itself of tonight to advance a final map to adoption on Nov. 18.

The Redistricting Charter Amendment was written by the City Attorney's office, backed by Mayor Garcia and City Auditor Doud and approved by voters in 2018 ostensibly to reduce political influence in census-required balancing population in electoral districts. The Charter Amendment forbids the Redistricting Commission from taking into account the residence of any individual in drawing district lines but is required to respect communities of interest and geographically contiguous areas. Some have questioned whether Map 2 and the last minute map proposing to amend it respect these principles by letting the Airport split newly drawn CD 5..

Airport-impacted community advocate Rae Gabelich supported having more than one Airport impacted Council district touch part of the Airport, but she didn't envision splitting CD5 or attaching geographically disconnected Cal Hts and a split version of Bixby Knolls onto CD 5 to do it.

Each Council district is geographically contiguous, to the extent practicable, and has a clearly defined boundary. (b)[T]the Commission shall consider the following criteria when drawing the final map, in order of priority:

(1) The geographic integrity of a neighborhood should be respected in a manner that minimizes its division.
(2) Communities of interest. The geographic integrity of a community of interest should be respected in a manner that minimizes its division. A community of interest is a contiguous population that shares common social and economic interests that should be included within a single district for purposes of its effective and fair representation;
(3) Neighborhoods and communities sharing a common language, history, culture and identity should not be divided so as to dilute their voting power;
(4) Geography and topography: Districts should respect major topographic and geographic features of the City;
(5) District boundaries should be easily identifiable and understandable by voters. Districts should be bounded by natural and artificial barriers, by street lines, and/or by City boundary lines;
(6) Districts should be geographically compact such that nearby areas of population are not bypassed for more distant population;
(7) All lines must correspond to census blocks in order to preserve the validity of data and avoid arbitrary boundaries; and
(8) Other Commission may adopt other criteria that do not conflict with the other requirements and criteria listed in this section or with state or federal law.