News / VIDEO
Reform Ticket City Council Candidates Robert Fox (2nd Dist.) And Juan Ovalle (8th Dist.) Sign This "Reform Pledge," Vow That If Elected, They'll Seek Changes In How LB City Hall Currently Operates And Treats The Public If LBREPORT.com didn't tell you,
who would?No one in LBREPORT.com's ownership, reporting or editorial decision-making has ties to development interests, advocacy groups or other special interests; or is seeking or receiving benefits of City development-related decisions; or holds a City Hall appointive position; or has contributed sums to political campaigns for Long Beach incumbents or challengers. LBREPORT.com isn't part of an out of town corporate cluster and no one its ownership, editorial or publishing decisionmaking has been part of the governing board of any City government body or other entity on whose policies we report. LBREPORT.com is reader and advertiser supported. Support independent news in LB similar to the way people support NPR and PBS stations. We're not so it's not tax deductible but $49.95 (less than an annual dollar a week) helps keep us online. (Oct. 18, 2019, 6:00 a.m.) -- Signaling a coordinated effort to change a number of current City Hall practices and replace the City Council incumbents who've enabled them, 8th dist. City Council candidate Juan Ovalle and 2nd dist. Council candidate Robert Fox publicly signed the Reform Pledge (details below) advanced by LB's grassroots Reform Coalition. The Reform Ticket candidates variously vowed that if elected they will pursue changes in the way LB's current City Council has allowed City Hall to operate...and will treat the public with greater respect in conducting the public's business, 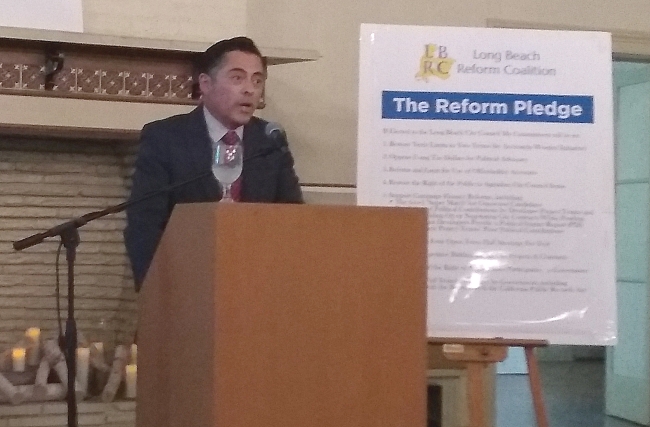 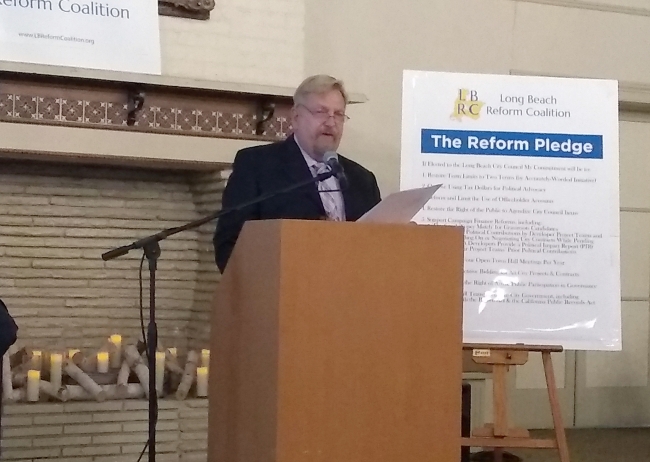 The Reform Pledge signed by candidates Fox and Ovalle states:

If elected to the Long Beach City Council, my commitment will be to:

3. Reform and limit the use of officeholder accounts

4. Restore the right of the public to agendize City Council items

7. Insist on competitive bidding on all city projects and contracts

8. Always defend the right of active public participation in governance.

9. Reinvigorate full transparency in city government, including compliance with the Brown Act and the California Public Records Act. 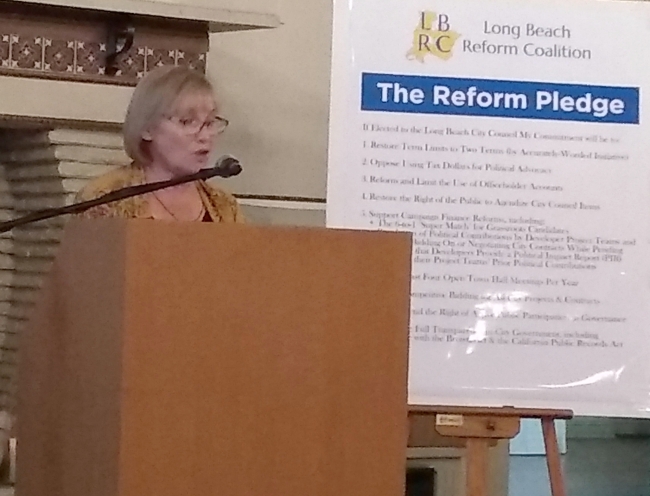 Reform Ticket candidates Ovalle and Fox then addressed the audience. 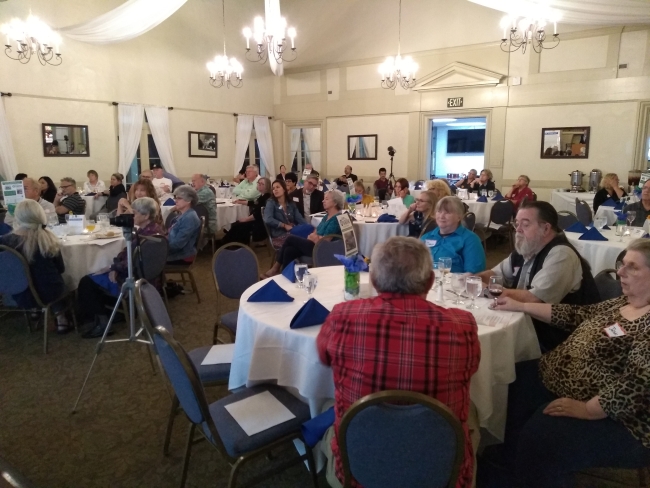 Several items in the Reform Pledge take aim at actions implemented by the LB Council since mid-2014 (when Robert Garcia advanced to Mayor.)

Item 1 focuses on Measure BBB, which triggered formation of the Reform Coalition after Council incumbents placed it on a special Nov. 2018 citywide ballot with the support of Mayor Garcia (who then used a political committee he operates to outspend the Reform Coalition in a six-figure campaign for the measure.) BBB enables Council incumbents and Mayor Garcia to seek third terms without meeting LB's former write-in requirements. Among the first to use BBB is 8th dist. Councilman Al Austin now seeking a third term. (6th dist. incumbent Vice Mayor Dee Andrews is also seeking a third term, and Mayor Garcia recently formed a Committee to seek the Lt. Governor's office in 2026 signaling he plans to seek a third Mayoral term in 2022.)

Item 3 takes aim at changes implemented by the current Council under Mayor Garcia that tripled and then politically weaponized the Mayor/Councilmembers' contributor-funded "officeholder accounts." A 2015 Council-majority action spearheaded by Councilwoman Lena Gonzalez (whom Mayor Garcia chose to chair of the Council's "Elections Oversight Committee") tripled annual totals the Mayor/Council incumbents can collect from contributors. Two years later, Garcia's newly chosen chair for the same Council committee, Jeannine Pearce, advanced a further change in which Councilmembers allowed the Mayor and themselves to use their now-tripled officeholder accounts to support other candidates running for political offices.

Item 8 takes aim at City Council procedures (initiated at the request of 4th dist. Council incumbent Daryl Supernaw) and implemented by the Council that cut public speakers to 90 seconds each when more than 10 seek to speak to agenda items and also requires public speakers to submit speaker cards prior to the items being called.

Other items focus on matters that grassroots advocates have sought to change to no avail from Council incumbents:

Item 2 targets a city management practice allowed without Council objection that has spent public money to disseminate what management and the City Attorney's office call "informational material" on City Hall advanced ballot measures that opponents call barely disguised advocacy. (A complaint filed with the FPPC by former 5th dist. Councilwoman Gerrie Schipske explicitly naming the City of LB was dismissed without discussion or a ruling by FPPC staff.)

Item 5 is entirely new, including a "Project Impact Report" focusing on a developer's prior political contributions.

And item 4 reaches back in time to restore a right that the public lost: the ability to agendize items and thus effectively require Council discussion on items that the public considers important but Council incumbents may not want to discuss. LB residents had this right until a mid-1990's action by a Council under then-Mayor Beverly O'Neill.