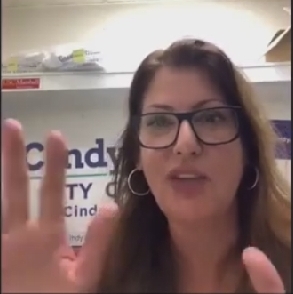 (Oct. 10, 2020, 5:55 a.m.) -- Second district City Council candidate Cindy Allen declined to answer and abruptly exited an Oct. 8 Zoomed election debate presented by the Alamitos Beach Neighborhood Ass'n when asked if she acknowledges or disputes that if elected, her ETA sale agreement creates potential conflicts by entitling her to 10% of the firm's net revenue under certain terms for the next three years.

A few seconds after the moderator mentioned ETA (her recently-sold firm) Ms. Allen interrupted and indicated she wouldn't respond to the question. At one point she labeled it an "attack question." Ms. Allen thanked ALBA for the debate opportunity, announced she was leaving and disconnected electronically from the Zoomed event.

A third party has webposted a video clip of the exchange at this link..

The question was emailed to ABNA (whose Facebook page invited emailed public questions) by LBREPORT.com at 5:27 p.m. on Oct. 8. As submitted: the question was: "Directed to Ms. Allen: Do you acknowledge or dispute that if you're elected, receiving 10% of ETA's net revenues for three years would create potential conflicts between your business interest and your elective offfice?"

The question didn't ask about allegations in a 10 page civil lawsuit brought by ETA's buyers (LBREPORT.com coverage here); it inquired about the ETA sale agreement that Ms. Allen signed in July 2020 whose provisions became public as an attached exhibit to the lawsuit.

LBREPORT.com publisher Bill Pearl [author of this article] voiced surprise and disappointment at Ms. Allen's response. "Long Beach is a major California city and no candidate seeking elective office here should expect some privilege to avoid answering media questions about how their private business interests might affect their public duties," Mr. Pearl said. "We invite and urge Ms. Allen to answer the question,"

As of dawn Oct. 10, to our knowledge only two LB news outlets -- LBREPORT.com and the Beachcomber -- have told their readers that the July 2020 ETA sale agreement contains a provision entitling Ms. Allen (currently seeking a four year term on the City Council) to 10% to ETA's net revenue on certain terms for three years.

(b) The Company shall pay Seller its revenue share on a quarterly basis, within 30 days following the close of each calendar quarter during the applicable payout periods. Each payment to Seller shall be accompanied by a written statement signed by Buyer showing the method and the specific dollar figures used by Buyer to calculate the amount of the Net Revenue and the Seller’s payment amount for that period.