Vowing To Change ("Disrupt") Current Space Industry Assumptions, Long Beach Based Relativity Space Announces Plan To Build "Terran R" Fully Reusable Entirely 3D PRINTED Launch Vehicle 20 Times Larger Than Its Previous Rockets; Simultaneously Announces Boosts In Funding And Hiring If LBREPORT.com didn't tell you,
who would?No one in LBREPORT.com's ownership, reporting or editorial decision-making has ties to development interests, advocacy groups or other special interests; or is seeking or receiving benefits of City development-related decisions; or holds a City Hall appointive position; or has contributed sums to political campaigns for Long Beach incumbents or challengers. LBREPORT.com isn't part of an out of town corporate cluster and no one its ownership, editorial or publishing decisionmaking has been part of the governing board of any City government body or other entity on whose policies we report. LBREPORT.com is reader and advertiser supported. Support independent news in LB similar to the way people support NPR and PBS stations. We're not so it's not tax deductible but $49.95 (less than an annual dollar a week) helps keep us online. (June 10, 2021, 11:25 a.m.) -- In a jaw dropping press release, Long Beach based Relativity Space ("the first company to 3D print an entire rocket") announced on June 8 plans to build "Terran R," a fully reusable entirely 3D printed launch vehicle 20 times larger than its previous rockets.

"Disrupting 60 years of aerospace, Relativity’s radically simplified supply chain enables the company to print its rockets with 100x fewer parts in less than 60 days," says its release. "With rapid software and hardware changes, the same Factory of the Future platform Relativity developed for Terran 1 is capable of scaling to produce Terran R. To date, Relativity has secured multiple contracts across nine customers for Terran 1 from both private and government entities, including a recently announced U.S. Department of Defense (DoD) contract, facilitated by the Defense Innovation Unit (DIU), a Venture Class Launch Services Demonstration 2 contract with NASA as well as an on-demand satellite launch contracts with Iridium and Telesat. Relativity has now completed printing over 85% of the first Terran 1 flight article, including its first and second stage, keeping momentum for its launch this year." 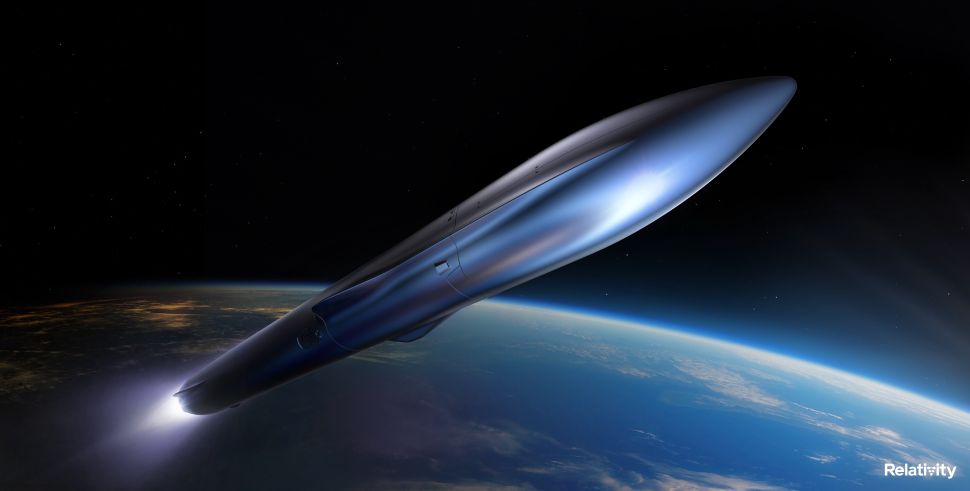 For a company video, see below

In its release, Relativity states: