-->
Long Beach's Future In Space
A Continuing Series
Long Beach Based Virgin Orbit Capitalizes On Its Unique Air Lauched System To Provide Launch Capability To Brazil If LBREPORT.com didn't tell you,
who would?No one in LBREPORT.com's ownership, reporting or editorial decision-making has ties to development interests, advocacy groups or other special interests; or is seeking or receiving benefits of City development-related decisions; or holds a City Hall appointive position; or has contributed sums to political campaigns for Long Beach incumbents or challengers. LBREPORT.com isn't part of an out of town corporate cluster and no one its ownership, editorial or publishing decisionmaking has been part of the governing board of any City government body or other entity on whose policies we report. LBREPORT.com is reader and advertiser supported. Support independent news in LB similar to the way people support NPR and PBS stations. We're not so it's not tax deductible but $49.95 (less than an annual dollar a week) helps keep us online. (May 2, 2021, 6:30 a.m.) -- Virgin Orbit, a satellite launch firm based in Long Beach's Douglas Park (4022 E Conant St.) has capitalized on its unique ability to launch from basically anywhere (using its specially equipped 747 aircraft "Cosmic Girl") by inking a deal with the Brazilian Space Agency and Brazilian Air Force to bring orbital launch capabilities to Brazil. 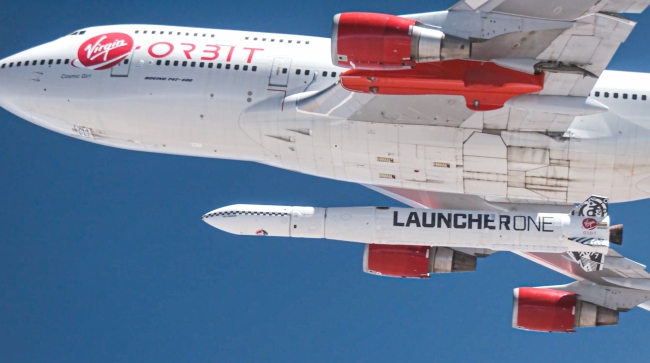 Brazil hasn't yet successfully completed a domestic launch from its Alcântara Space Center, two degrees south of the equator on Brazil's northern coast. Virgin Orbit plans to leverage that existing infrastructure and fly to locations from which its "Launcher One" wil propel the orbital rocket payload and release it "optimized for each individual mission " Virgin Orbit says the approach will enable "Alcântara to become one of the only continental spaceports in the world capable of reaching any orbital inclination." .

[Scroll down for further] .

As previously reported by LBREPORT.com (part of our continuing series "Long Beach's Future in Space"), QinetiQ (a defense and security company) and HyperSat (a geospatial analytics company) chose Virgin Orbit to launch a series of six hyperspectral satellites into to Low Earth Orbit."in part because of the unparalleled agility, mobility, and responsiveness afforded by air-launch, which allows for shorter call-up times and more flexible scheduling for customers, as well as direct injection into precise target orbits."

Long Beach is also home to Rocket Lab, officed at 3881 McGowen St. which launches self-manufactured rockets from a facility in New Zealand to deliver small satellites into low earth orbits, and Relativity, HQ'd at 3500 E Burnett, now developing a printed rocket. Space X recently agreed to use a portion of the Port of Long Beach's Pier T as a marine terminal to dock vessels and offload equipment as part of west coast rocket recovery operations