Doug Krikorian / Viewpoint
The Many Memorable Characters I've Befriended Across The Decades, Including The Appropriately Named Preposterous One In Long Beach Known Far And Wide As Bad Stu Ledsam

If LBREPORT.com didn't tell you,
who would?No one in LBREPORT.com's ownership, reporting or editorial decision-making has ties to development interests, advocacy groups or other special interests; or is seeking or receiving benefits of City development-related decisions; or holds a City Hall appointive position; or has contributed sums to political campaigns for Long Beach incumbents or challengers. LBREPORT.com isn't part of an out of town corporate cluster and no one its ownership, editorial or publishing decisionmaking has been part of the governing board of any City government body or other entity on whose policies we report. LBREPORT.com is reader and advertiser supported. Support independent news in LB similar to the way people support NPR and PBS stations. We're not so it's not tax deductible but $49.95 (less than an annual dollar a week) helps keep us online. (June 21, 2021) -- One of the defects of my lengthy existence is an implausible compulsion to be attracted to characters, people who trod through life zanily, mysteriously, erratically, hilariously, goofily and, always, in a unique manner that sets them dramatically apart from fellow human beings.

One of the first of what would be many I met as a young sportswriter at the Los Angeles Herald Examiner was a gentleman known as Bow Wow, who became a sacred part of UCLA athletics because of his close relationship with the football coach Tommy Prothro and who oversaw Blair Field security during Prothro's two forgettable seasons with the Rams.

Not much was known about the background of Stanley Thomas Wojtkiewicz except that he had been one of gossip columnist Sheila Graham's husbands and that the phone number on the business card he savored handing out to friends like me would lead you to an operator in Madrid, Spain.

And then there was the notorious Chicago Jerry Berliant, whom the late Cubs' announcer Jack Brickhouse once described as the ``world's greatest gate crasher'' and, oh, there wasn't a big sporting event or major press conference or A list party that Mr. Berliant would somehow make an appearance and who always had money even though he had no visible means of support and was rumored to be a disbarred attorney.

And then there was the elegantly dressed, tall gentleman always adorn in an expensive fedora from LA I knew only as Flip, and I always saw him at Laker games and always saw him at Caesars Palace at big fights where the hotel always bestowed him a lengthy reservation with the most desirable capital letters on it in Las Vegas---RF&B (free Room, Food & Beverage).

I was told Ol' Flip handled tickets for Don King, but how in tarnation did he always wind up at the finish line and winner's circle at the Kentucky Derby?

And then there was Norm (The Plunger) Gray, a Santa Clarita car dealer (the old Magic Lincoln Ford) who routinely made $250,000 bets on football games and who I saw one afternoon bet $50,000 a race at the Mirage sporting book and who I actually flew with him and his brother Bobby back from Las Vegas that weekend to Burbank on a 727 jet owned by the Mirage operator Steve Wynn (we three, a flight attendant and the two pilots were the only ones on the plane).

I once was invited to dinner with Mr. Gray at Caesars' exclusive Palace Court restaurant, and the tab for eight diners came to around $10,000 (plenty of servings of caviar and plenty of shots of Louis XIII), with Mr. Gray leaving a generous tip of five $1,000 chips.

And then there were the two legendary late LA ticket scalpers Donnie (No Win) Kramer and Alex Henig, both of whom kept you in stitches (one of Henig's pallbearers was O.J. Simpson) with their bizarre deportment.

All these individuals had titillating tales to tell and seemed to know everybody who was anybody---and always kept me wildly entertained with their eccentric antics.

Actually, there is a local gentleman who classically fits such a mold, and, of course, I'm talking about the founder of the Belmont Shore Rugby Club, Stu Ledsam, known far and wide among friends, foes and those who don't even know him simply as Bad Stu.

Oh yes, Bad Stu Ledsam, who once consumed 250 gold fish and perhaps 15 beers in less than an hour in an eating contest at the old Acapulco Inn and later that day somehow was able to attend a wedding in Newport Beach, who once was pepper-sprayed by cops during a brawl before a USC-UCLA game at the Rose Bowl, who once was thrown in an Atlanta jail for jaywalking before a Dodger-Brave game, who once got in a fight on the shoulder of the freeway access to the 210 after a UCLA game, and who once beat up a 300-pound former NFL player in the parking lot of the old Kelly's. 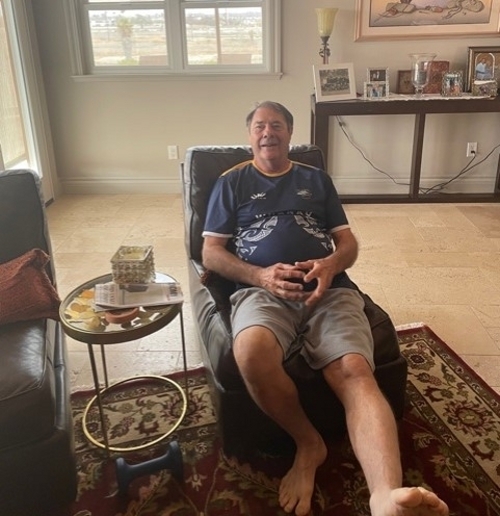 Bad Stu Ledsam relaxing at his home. The legendary LB character will speak Wednesday night at 6 o’clock at the Naples Rib Company on the rules and laws of 7 A Side rugby which will be seen in summer Tokyo Olympics

Krikorian Notes: From No-Bail Insanity To Government Handout Insanity To City Auditor Laura Doud's Exhaustive Investigation Of The Latest Queen Mary Bankruptcy Suitor Urban Commons To K-5 Kids Still Having To Wear Masks And Having Their Temperatures Taken To Novak DJokovic Being The GOAT Of Tennis